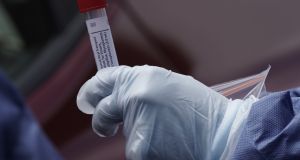 There is significant capacity for testing for coronavirus in Ireland, said the president of the ICGP. Photograph: Bing Guan/Bloomberg/File

While there is significant capacity for testing for coronavirus in Ireland, there appear to be difficulties after testing, according to Dr Mary Favier, president of the Irish College of General Practitioners (ICGP).

On Sunday, HSE chief executive Paul Reid said testing capacity in the State is now at 15,000 per day. He said the turnaround time for tests is 2.4 days on average, and that there are 3,010 healthcare workers currently on Covid-19 related leave.

Speaking on Monday, Dr Favier said robust testing and speedy contact tracing are necessary if restrictions are going to be lifted.

There are a variety of reasons for delays, but in general the testing service had improved with results, on average, coming back quickly, Dr Favier told RTÉ’s Morning Ireland.

Dr Favier said a week ago it was taking seven days for results, now it was three days for her patients. She described the change as “a definite improvement.”

The ICGP has launched a helpline for GPs addressing problems, which should be of assistance, she said.

Getting results within three days was good, she said, but there were then further delays with contact tracing which could take a further two days. That makes the service less effective, especially if contacts had to be chased.

There is a good baseline service, she said, but it was necessary to find out why in some cases it was difficult to get results more quickly.

“There is significant capacity to perform tests, the difficulty appears to be after the tests are collected,” she said.

Dr Favier said that she thought the target of 15,000 tests per day was possible, if it was necessary to carry out so many.

The latest figure from the National Public Health Emergency Team (NPHET) indicate the rate of growth in infected cases is holding steady at about 1 per cent per day, with Sunday’s growth slightly above that level.

As of midnight on Friday, 57 per cent of cases in Ireland are female, while 43 per cent are male. The median age of confirmed cases is 49 years, and 2,986 cases - or 13 per cent - have been hospitalised.

First ever woman president of an Irish university appointed at University of Limerick 14:58
Varadkar accused of naivety over ‘Covid penalty’ on mortgage holders 14:26
Learner drivers could be forced to take driving lessons to renew permits 13:20
Covid-19: Small minority of pubs putting health of customers and staff ‘at risk’ 13:05
Six counties had no Covid-19 case over past week 12:51