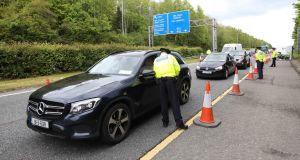 Officers who manned checkpoints in several counties said there was a noticeable increase in traffic. Photograph: Photograph: Rolling News

Traffic increased more than a third over the weekend compared to the Easter bank holiday as signs of complacency and frustration with the coronavirus lockdown start to surface.

There was an even bigger increase in the number of cars on the road on and near the Border with Northern Ireland as motorists from the North continue to exploit a loophole in the movement restrictions which allows them to travel into the Republic for non-essential reasons without facing penalty.

The current restrictions on social and economic life will be eased in stages from May 18th but from Tuesday two changes take effect. The limit for exercising from people’s homes is being extended from 2km to 5km, and the recommendation that over-70s “cocoon” at all times is being adjusted to allow for outings with appropriate social distancing.

According to an Irish Times analysis of traffic data from the country’s 13 motorways, there was a 35 per cent increase in traffic on Friday and Saturday when compared to the Easter bank holiday weekend.

There was a similar 36 per cent increase in traffic on 18 roads which either cross the Border or run alongside it. This increased to 38 per cent when only cars are counted.

By comparison, the equivalent rise between the two bank holiday weekends in 2019 was just 2 per cent. It was zero per cent when only cars are counted.

The figures are based on data from Transport Infrastructure Ireland which operates dozens of traffic monitoring stations around the country.

This weekend car traffic on several motorway sections was almost 50 per cent higher than it was on the Easter bank holiday, including on the M6 in Westmeath (46 per cent) and M8 near Fermoy in Cork (44 per cent).

The M50 between Dundrum and Sandyford in south Dublin recorded an increase of more than 42 per cent compared to April’s long weekend.

On Friday the Government announced a road map for lifting of lockdown restrictions. This will begin with the opening of some businesses and outdoor areas on May 18th.

The Garda said on several occasions over the weekend there had been good compliance with movement restrictions. But individual officers who manned checkpoints in several counties said there was a noticeable increase in traffic.

Nonetheless, there was no large jump in arrests, said gardaí. “Everyone has their excuses ready. We have no means of checking those excuses,” said one officer.

“There is definitely some complacency setting in everywhere, especially as the daily figures continue to improve,” said another.

There were traffic increases of more than 50 per cent on several cross-Border roads including on the N3 between Belleek in Fermanagh and Ballyshannon in Donegal which marked a 57 per cent increase.

The Border situation has been a source of growing frustration for gardaí in the region, with one commenting that it means they are policing “with one hand tied behind our back”.

Senior gardaí in the Border region have raised the issue with Garda Commissioner Drew Harris. Some were under the impression that amending legislation was being planned to close the loophole but the Government and Mr Harris has said there is no requirement for this.

Gardaí in the Border region believe next weekend is likely to have an even greater increase in traffic volumes as it is a bank holiday in the UK.

“People are coming across the Border and on to west Donegal or Sligo, places like Bundoran. It makes locals there wonder why they bother following the rules,” said one garda.