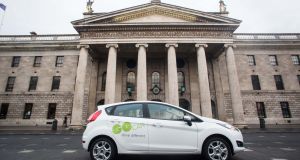 A local authority has made six locations available for motorists who wish to use GoCar vehicles.

South Dublin County Council has launched six GoCar car-sharing bases where cars will be parked for the public to use.

GoCar sign up to the service online or via an app. The vehicles can be unlocked with their phone or GoCar. The keys are in the car, with fuel, insurance and city parking all included.

Rates start from €8 per hour, with 50 kilometres of driving included on each trip. It is meant for short trips as it costs 50c per kilometre after the 50 kilometres are up.

The location of the six new bases in the county are as follows:

Lucan: Opposite Topaz, beside bus stop

Rathcoole Village: Opposite Bank Of Ireland

He added: “It is hoped that this initiative will help promote a culture of communal travel and, as a start in that direction, reduce the necessity of families needing a second car.

“South Dublin County Council are extremely happy to be involved with this project and I hope it will be beneficial to both residents and businesses across the county.”