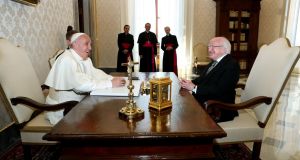 An advantage of being “spiritual” rather than religious, as President Michael D Higgins described himself during his election campaign in 2011, is that no one can accuse him of being a sycophant when he praises the Pope.

A loss of the faith of his fathers – biological and spiritual – underscores the sincerity of the President’s exceptionally warm comments about Pope Francis and spirituality in general at the Irish College in Rome on Monday.

Yes, we’ve come a long way in a short time. Since July 20th, 2011, for example. That was when Taoiseach Enda Kenny accurately reflected the rage of the Irish people when he said “the Cloyne report excavates the dysfunction, disconnection, elitism – the narcissism – that dominate the culture of the Vatican to this day. The rape and torture of children were downplayed or ‘managed’ to uphold instead, the primacy of the institution, its power, standing and ‘reputation’ ”.

That “calculated, withering position” was, he said, “the polar opposite of the radicalism, humility and compassion upon which the Roman Church was founded.” He spoke “as a practicing Catholic,” which meant “I don’t say any of this easily”.

A predecessor was also a practicing Catholic. That was 60 years earlier in April 1951. During a Dáil debate on the Mother and Child scheme, opposed by the Catholic Church and which collapsed his government, taoiseach John A Costello told the Dáil: “I am an Irish man second, I am a Catholic first, and I accept without qualification in all respects the teaching of the hierarchy and the church to which I belong.”

It was President Higgins’s great hero, then minister for health Dr Noel Browne, who proposed the scheme which would have provided free healthcare for mothers and their children up to the age of 16. The bishops and the doctors brought it down. A Seán Keating portrait of Dr Browne presides over the President’s study at Áras an Uachtaráin.

On Monday President Higgins described Pope Francis as “an indispensable voice of humanity and clarity” and he looked forward to welcoming him to Ireland next year. It was all so very far removed from 1951 and 2011.

A new relationship is born.