New University of Limerick chief to deal with damaging allegations 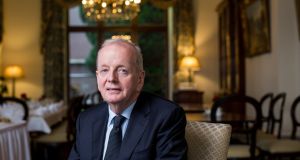 Dr Des Fitzgerald: Has outlined his plans to put new management and governance systems in place. Photograph: The Irish Times

On his first day as the new president of University of Limerick earlier this month, Dr Des Fitzgerald sat down to to write a short email.

Until then, the college had firmly rejected calls for an independent inquiry into a series of damaging allegations relating to financial irregularities and human resources practices.

The chancellor of the university, the former chief justice John Murray, had insisted the matters were for the university alone to deal with and suggested that authorities were bowing to “political pressure” in calling for a wide-ranging review.

In an email to the Department of Education’s secretary general on May 2nd, Dr Fitzgerald quickly reversed the university’s stance.

He said an independent review of allegations was warranted and outlined his plans to put new management and governance systems in place.

The independent review to be led by the former president of Sligo Institute of Technology will commence in the coming weeks. It is due to review at least a dozen protected disclosures or allegations.

The allegations, broadly speaking, are linked by a common theme of poor human resources practice within the university, lapses in governance and unauthorised severance payments for staff.

They include claims of a “VIP expenses system” for senior staff, a €150,000 settlement for a former lecturer alleged to have inappropriately touched students and the use of other six-figure confidentiality agreements for former staff.

Three weeks into his new role, Dr Fitzgerald says he is keen to address these issues and is working on implementing systems to ensure mistakes are not repeated.

“I just thought we needed to send a strong signal that we were going to deal with this. And we were going to do it in a way that was independent,” he told The Irish Times. “I was very concerned and disturbed by [the allegations], particularly by what we might not know. That was a big part of putting an independent review in place.”

Fitzgerald says he has a duty of care to both the whistle-blowers and staff who are at the centre of allegations. When the review’s findings are completed later this years, he says, the university will take action.

“I’m not rushing to judgement here. I want to have the information that will ultimately allow us to make appropriate decisions.”

So, does that mean senior staff will be made accountable for handing of particular cases? “There are processes that, if there has been a mistake made, it will be addressed with the individuals,” says Dr Fitzgerald.

Even before he took up his official role in May, he says, Dr Fitzgerald says he could see there were issues with management and governance structures that needed to be addressed at the college.

“When I came in initially in January and had a look at the senior management structures, it was fairly anaemic, fairly light, given the fact that they had a budget of €140 million and they were running what was, in effect, a small town,” he says.

Fitzgerald, who was previously a vice-president at UCD, says he was surprised at the substance of allegations, including severance packages which seemed to be “extraordinary”.

“My sense is there is a thread running through this – that’s what we need to better understand,” he says. “Was it solely pressure inside the university, or were there pressures coming from other places?”

While he will wait for the review to deliver a full picture of allegations, Dr Fitzgerald says he is not waiting around to take action.

His reform plans involve stronger governance across the different university departments and ensuring that key policies are properly implemented. This, he says, will result in new appointments across the senior management team.

The changes, he says, should help ensure the university doesn’t repeat mistakes it has made.

He accepts the allegations should have been handled in a more timely and sensitive manner early on.

“I’d be more open with people. I’d be one to intervene early on, rather than let things grow. We don’t know yet the scale of what was involved. It is possible that these things have been allowed to grow dramatically, whereas had the university intervened earlier, a solution could have been found.”

Dr Fitzgerald, a clinical researcher, says he is ambitious for the university. Formerly one of the country’s highest-paid academics, he took a pay-cut of about 20 per cent to join the university on his €180,000-a-year, 10-year post.

He says he wanted to boost the college’s research capacity, improve its international rankings, boost its reputation and attract many more international students.

In the meantime, he needs to tackle the cloud of allegation that have hovered above for the university for months.

“When you train as a doctor, one thing you realise is that mistakes happen. One of ways you use judgment is not just how you look after a patient, but how you deal with mistakes,” he says. “It is something we need to be able to address.”