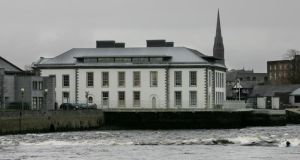 View from Thomond Bridge in Limerick city. Bryan Whelan (29), from Bridgetown, Co Clare, died after he became trapped in the River Shannon when a cage platform he was working on while repairing Thomond Bridge collapsed after a cable being held by a crane snapped. File photograph: Brenda Fitzsimons/The Irish Times

The funeral Mass of one of the men who died while trapped in a cage in the River Shannon last Saturday has heard he died while trying to keep others safe.

Family members, friends and work colleagues, said goodbye to the “gentleman” bricklayer Bryan Whelan, who was said to have a “heart of gold”.

Mr Whelan (29), from Bridgetown, Co Clare, became trapped in the river after a cage platform he was working on while repairing Thomond Bridge, Limerick city, collapsed after a cable being held by a crane snapped.

TJ O’Herlihy (36), a stonemason from Castleisland, who was working alongside Mr Whelan on his first day in the job, also died in the tragic incident.

Paul Murphy (36), from Askeaton, Co Limerick, who was also working on the platform, escaped without injury.

“While Bryan’s death is indeed an immeasurable loss to his parents and siblings and the local community...he tragically lost his life last Saturday afternoon whilst making Thomond Bridge in Limerick city safe for other people to use,” Fr John Bane, PP, Broadford, told mourners.

“So there is that consolation, that he was still doing something worthwhile, even when he was taken in death,” Fr Bane said.

In an emotional eulogy, Mr Whelan, whose brother Bryan had been his best man at his wedding, and godfather to his son Jack, added: “To say our family is heartbroken is an understatement.”

“Our world, as we know it, was turned upside down.”

Mr Whelan said his brother was “charming, charismatic, and hard-working”, a man who “excelled” in his job as a bricklayer and bridge repairer, which mourners were told was a specialised skill.

“Bryan’s workmanship surrounds us in our homes...be it a wall, stonework, a pier, a fireplace,” Mr Whelan said.

“Bryan was a person you could count on, a real gentleman.”

“He had a heart of solid gold.”

“He loved his family...loved hurling, cars, and music, and animals - another testament to his ‘kid’ nature,” his sibling added.

Mourners loudly applauded as John Paul Whelan, who broke down in tears, said finally to his brother, who is also survived by parents John and Margaret and sisters Veronica and Maria: “I love you, we love you. Farewell for now, until we see you again.”

Bryan Whelan was laid to rest in Kilbane Cemetery in a solid oak coffin draped in a jersey of Broadford GAA club, with whom he had played hurling.

The removal of TJ O’Herlihy’s body will take place from 5pm-7pm, Thursday, at Tangney’s Funeral Home, Castleisland, followed by Requiem Mass in Castleisland Parish Church on Friday at 11am, with burial afterwards in Kilbanivane Cemetery, Castleisland.