Life is a rollercoaster for 93-year-old ex-RAF airman

In 1944 Ted Veal was the sole survivor of an RAF bomber which was crashed in Italy. Now 93 and living in Ireland, he's determined to fulfill all his life's ambitions, including riding a rollercoaster. 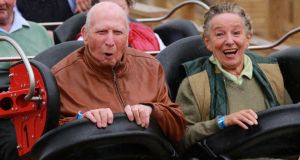 When you are the sole survivor of a second World War bomber which crashed into mountains in Italy, a ride on a rollercoaster must seem like a gentle stroll.

Nevertheless, the vertiginous and terrifying Cú Chulainn Coaster at Tayto Park is not for the faint hearted nor for the feeble bodied.

Fortunately, even at the age of 93, Ted Veal, is neither of these things. He took to the rollercoaster as he has taken to gliders and Tiger Moths and bombers of all kind in a life which he acknowledges has been both fortunate and packed with activity.

Riding a rollercoaster is on his “bucket list” of things to do along with a hot air balloon and “then I’m done”.

When the ride on Europe’s largest wooden rollercoaster with an inversion was completed Mr Veal pronounced it as a “seven out of 10” on the scale of terrifying things he has done. “It was absolutely brilliant. I was scared stiff like everyone is but as long as you yell as you go, you’ll be alright.”

Originally from London, Mr Veal joined the RAF before the war. His father’s experiences in the trenches during the first World War put him off the army.

He wanted to be a pilot, but instead ended up as a radio operator and rear gunner. Though disappointed, his position at the rear rather than the front of the aircraft saved his life on June 2nd, 1944.

He was part of a four-man crew in a Baltimore light bomber which was being used for offensive military operations missions during the Italian campaign.

One engine failed on the way out, the second on the way back from the mission. The three other crew members were killed. One of them was Flight Lieutenant Peter Hill whose father Air Marshall Sir Roderic Hill commanded the air defence of Great Britain.

Mr Veal managed to exit the plane via a rear exit door and parachute down on to the side of a remote mountain. “I had a soft landing on my bottom,” he recalls. Even then the danger was not passed. He found himself behind enemy lines and narrowly missed a German transport group. Some Italian partisans found him and returned him to safety. “My mother always said, ‘if Ted fell into a sewer, he’d come out smelling of roses’.

“I’m been flying with two of the crew for a long time. Everyone now and then I’d remember them especially when there are things on TV, but I always look forward, I don’t look back.”

Mr Veal concedes that all wars are “bloody mad but this one had to be done.”

Instead, he was in light bombers which were used to soften up the German troops before the army went in. His war time service saw him “chase Rommel up and down the desert of north Africa”, then on to Italy and finally to the Far East.

He was not with Bomber Command “a bloody dangerous business”, as he remembers. Nearly half of all those who flew with Bomber Command were killed. While working in a copper mine in Zambia after the war, he met his Irish-born wife Deirdre Wilkinson who was a nurse.

They moved to Wicklow in 1969, he got a job in Avoca Mines and has lived here since even after his wife sadly passed away in 1998.

“I met her when I was 52. She looked after me well. I’m now a member of the Wilkinson clan now,” he said.

“People are all amazed when I tell them about the war, but a lot of Irish people were in the war anyway.”