Lidl looted during Storm Emma set to reopen next month 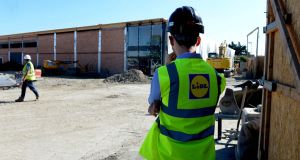 On the morning after the Lidl on Fortunestown Lane in Jobstown, Co Dublin, was broken into and looted last March, Solidarity councillor Brian Leech was out helping residents move their snowbound cars.

“I spent four or five hours actually digging one man’s Audi out, along with two others. He was afraid it was going to be burnt out.”

Mr Leech, who has been living in Dromcarra in Jobstown for the last 38 years, said there were nine cars burnt out on March 2nd, during Storm Emma. The same night, a digger smashed through the roof of the local Lidl, before the store’s steel safe was stolen. A nearby Centra was also broken into.

“There was about 100 cars around the area that were trapped by the snow and people were just indiscriminately burning them out,” he said. “I actually saw people openly crying because they couldn’t move their car and they’d have to sleep in them. That was just thuggery.”

Nestled at the foot of the Dublin mountains, Jobstown is classified as “disadvantaged” by State agency Pobal, with small pockets listed as “very disadvantaged”.

The area became synonymous with an incident in November 2014, when a group of anti-water charges protesters surrounded Garda vehicles transporting then tánaiste Joan Burton and her assistant Karen O’Connell at Fortunestown Road.

While Mr Leech acknowledges Jobstown is “an area of major disadvantage”, he said floats which subsequently appeared at St Patrick’s Day parades of mock JCBs re-enacting the Lidl break-in were unfair. “We got bad press at the parade, you know, ‘Tallaght thugs’ and this type of thing. We felt it was really over the top, to be putting a slur on the community like that,” he said.

Six months after that night of looting and vandalism, Lidl is set to reopen with a larger store on the same site on August 30th. The German retailer had secured planning permission from South Dublin County Council for a larger store prior to the looting and the rebuild project was originally due to commence in May.

“The demolition part of the project was more complex given what happened, and did add on a couple of weeks to the overall project,” a spokeswoman for Lidl said.

Denise Cullen, area manager with Lidl, said the decision to rebuild the store was “very carefully weighed up by senior management”.

“Ultimately we know there is a very loyal customer base who appreciate and value the service we offer and it wouldn’t be fair for them to be at a loss due to the actions of others,” she said.

Ms Cullen said there was “sheer disbelief and shock” among management at the extent of the damage caused to the store.

“Obviously the store was closed at the time due to the snow so, like everyone, we were seeing the story unfold through social media,” she said.

Staff at the supermarket were subsequently relocated to other stores based on their own preferences. An additional eight workers will be joining the team from August.

Ten men appeared at Dublin District Court earlier this year facing a range of charges in connection with the raiding and looting at Lidl and the break-in at the nearby Centra. One case of trespassing has been dismissed, while the other nine are still before the courts.

Local Labour councillor Martina Genockey said that “people are still devastated that it happened in the community”.

“They really feel that it doesn’t represent the community. People don’t really like talking about it,” she said.

“There was a lot of people put out by it, there is a Dunnes Stores but obviously it’s not the same, Lidl is low-cost. There is anti-social behaviour in the area and there isn’t enough guards definitely – it does have an impact on people’s lives. But what happened at Lidl doesn’t represent the area.”

Among those affected was Joan Yates (57), from Rossfield, who said “my heart just dropped” when her son informed her the supermarket had been looted.

“I used to love going up there on a Saturday morning for the deals. I can’t wait for it to reopen,” she said.

Council takes legal action over street mural of David Attenborough 19:17
Ireland-Italy rugby match due to be called off over coronavirus risk 19:06
Watchdog ‘disappointed’ with review of State’s lobbying Act 19:05
Could Ireland put towns under lockdown if coronavirus arrived? 19:00
EU issues ultimatum to London ahead of Brexit talks 18:54