Action against Dublin landlord over Airbnb after neighbours complain 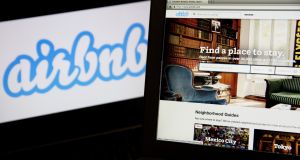 Former minister for housing Simon Coveney said there was a lack of clarity around the role Airbnb plays in the property market. Photographer: Andrew Harrer/Bloomberg via Getty Images

Fingal County Council has started enforcement action against the owner of a property in Malahide following complaints the house was being used exclusively for short-term lettings on Airbnb.

The case is one of three live cases before the local authority at the moment and the property owner involved is known to own several other properties.

Residents of the Warren Manor estate complained the house was being used solely for short-term lettings, despite not having appropriate planning permission.

Property owners require planning permission if they want to make substantial changes to the use of a building, such as opening a bed and breakfast with more than four guestrooms, which will have an impact on neighbours or the local community.

Fingal County Council said it had issued a number of letters concerning the issue and it expected progress on the matter in “the coming days”.

The council’s enforcement section received a complaint on January 18th concerning the private property at Warren Manor being operated as an Airbnb.

It issued a warning letter to the registered owner later that month under Section 152 of the Planning and Development Act. This letter was returned by An Post, it said.

The council said Land Registry Records showed the owner of the house at Warren Manor also owned several other properties.

The council added that a further warning letter was issued on February 17th, and the following month it received a submission from an architect on behalf of the respondent.

“This is an active ongoing investigation and proper due process must be observed,” the council said. “It is anticipated that there will be progress in this regard in the coming days.”

Local Fianna Fáil councillor Eoghan O’Brien said he had heard anecdotal evidence from colleagues in Fingal of a number of properties being used full-time as Airbnbs despite not having proper planning permission.

“In an area where it’s a purely residential estate, if somebody is looking to use a residential house for short-term letting 100 per cent of the year, I would say that is a change of use,” he said.

“What we’ve seen in recent times is that houses are being used solely for short-term lettings.” He said the frequent coming and going of guests could be very disruptive to neighbours of Airbnb properties. “We are seeing a lot more of this,” he said.

Last year, then minister for housing Simon Coveney said there was a lack of clarity around the role Airbnb plays in the property market.

He was speaking after An Bord Pleanála upheld a Dublin City Council decision that a two-bed property in Temple Bar had undergone a material change of use due to its Airbnb activity and was thus not exempt from planning regulations.