Lessons from down under: How not to do BusConnects

Reform of the city’s bus routes, modified from a Jarrett Walker plan, has been very turbulent 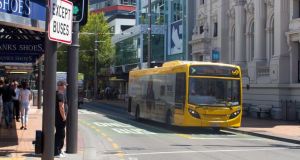 Take one plan by the United States-based transport planner Jarrett Walker, add in an aggrieved workforce and a regional council skimping on vital infrastructure, along with a lack of meaningful consultation with the public.

The result for New Zealand’s capital, Wellington? A series of blunders: “ghost buses” that never came, buses so overcrowded they removed the seats so more people could stand, while a driver abandoned a bus because it was stuck in a narrow street.

Between April and July, Wellington’s bus network, Metlink, went through a major shake-up. Ever since it has been the butt of jokes. Ever since there has been fury among passengers, emergency parliamentary debates and now threats to fine bus operators.

The city, which has windy, hilly roads, and is notorious for its bad weather, had a history of chronic bus congestion, particularly along the Golden Mile, the city’s the main commercial and shopping.

This line of buses snaked down the densest area of office blocks in the country, so it was no surprise to locals that journeys could slow down there. The delays prompted the Greater Wellington Regional Council to act.

It commissioned Brisbane-based consultancy firm MRCagney – which enlisted the help of Walker – to review Wellington’s bus routes, plan for future demand and cut down emissions. Walker is also the designer of Dublin’s BusConnects plan.

The overhaul of Wellington’s bus routes system coincided with major changes to bus tendering rules, brought in by the then conservative national government in 2013, which put all routes up for public tender.

NZ Bus, which is not publicly owned but is widely regarded as offering better wages and hours to drivers, lost its contract for many of Wellington’s routes. A company called Tranzurban – part of the Tranzit group – took on many.

Bus drivers were given new contracts. Overtime pay was ended; tougher split-shift working was brought in. Soon, Tranzurban was in conflict with the Tramways Union, which wants past pay and conditions brought back.

The strife poisoned the atmosphere. Many experienced drivers, who knew the capital’s maze of hillside streets well, quit. By July they were short 70-80 drivers. Tranzurban was forced to quickly recruit out-of-town drivers at short notice.

The new system cannot be blamed for industrial strife, but for many the rot does not stop with the shortage of drivers. Instead, the most disliked part of the plan has been the creation of so-called “bus hubs”.

The number of direct routes in Wellington has fallen. Instead, a hub-and-spoke model was brought in, where commuters transfer to connecting buses, instead of simply taking one bus all the way from A to B.

This was a big change. For most Wellingtonians, an entire journey in the past could be completed in one go, even if that bus only came every half hour and then had to crawl in heavy traffic down the Golden Mile.

Thirty-year transport management veteran Mike Mellor, who was a member of the regional land transport committee, argues that the reforms were not executed well in Wellington.

“It wasn’t done right ... There wasn’t the necessary infrastructure. The hubs weren’t completed,” he says, adding that the success of a hub-and-spoke system relies on buses running on time.

Before the change, a late or missing bus meant one busload of frustrated passengers. With the new one, problems would ripple throughout the network: “Punctuality is that much more important,” Mellor says.

“Now, if there’s a problem with the main north-south route from Johnsonville, that can spread all across the South Coast because of the route itself and the connections it has,” he says. This, and the lack of drivers, has resulted in chaos.

Donegal immigrant Eimear Rodden takes the No 14 bus to and from her suburban home to Lambton Quay in the city. Buses should come every 10 minutes at peak times, or every 30-50 minutes off-peak.

Her route has not changed, but the frequency of buses has: “I was waiting and the real-time app said one time, the boarding stop sign had a different time and a representative from Metlink with an iPad had another time. All she said was, ‘I hope it comes.’ ”

The longest delay has been 40 minutes, when three scheduled buses never showed up. The occurrence has become so common since July that Wellington commuters have dubbed them “ghost buses”.

St Patrick’s College rector Neal Swindells says 80 students were late for school a fortnight ago because of the changes, while two bus services, in the morning and afternoon, have become “grossly overloaded”.

“We can’t manage the loading of the buses in an orderly, safe way because we’ve got probably 300 kids waiting outside, the buses are all late, so as soon as the buses arrive they’re panicking they’re not going to get a seat.”

An extra bus has been promised, but the timetable is still a problem. Before, buses used to be outside the school five minutes before finish. Now, they come five minutes afterwards. Swindells says it is hard to manage the boys.

“It was never was a problem before because the buses were waiting when the boys walked out – whenever they got out of class, they walked on to the bus. It was all nice and orderly and easy, and all of a sudden it has become mayhem.”

Now it’s also hard for teachers to tell the truants from those affected by bus woes, with students blaming the buses for their lateness. “Whether that is quite true or not, the boys will probably milk that a little bit,” Swindells says.

Doubtful about the planning that went into the changes, he is particularly sceptical about the Walker hub-and-spoke model. Students going to the northern suburb of Churton Park now have to take three buses instead of one.

“It relies on every bus being on time ... Because of the difficult geography in Wellington – the steep hills and small traffic jams – often buses do run late and that throws the whole system out.

‘Bit of a nightmare’

Patricia Given, who has been living in Wellington for nine years, bought her house in Hataitai because it had good bus links, and they did not want to own a car. Now they have to leave earlier and earlier to get to work.

Frequently, Given has children with her. Before, she could get a direct bus with them. Now she must change: “Getting on and off buses with kids is a bit of a nightmare. I can only imagine how it would be if you had a buggy, or smaller children, or if you had a disability.”

“The [old] system worked. It may have needed a little bit of tweaking, as every city does with changes and growth happening, but it didn’t need the overhaul it got,” she says. She is considering buying a car.

“We miss a good reliable service and friendly bus drivers. No one says, ‘Thank you driver’ any more. I feel for the drivers who are on the front line putting up with all the chaos,” she declares.

How does this relate to Dublin?

The idea that Wellingtonians should have to switch buses was deeply unpopular from the off. In 2012, 83 per cent of commuters polled objected to the changes affecting them during peak-time journeys.

However, the system put in place in July is not the original Walker plan. The controversial “bus hubs” and the split journeys formed a key part of his recommendations but the rest was significantly modified along the way.

Walker has publicly distanced himself from the controversy. Last week he said he prepared a draft plan for Wellington “mostly in 2011, ending in early ‘12” though “my employer at the time, the Australian firm MRCagney”.

“I had no role in how the plan was presented to the public, and when that didn’t go well in 2012, I assumed it was dead. That is always a possible and valid outcome of a public consultation process.”

Mike Mellor is not sure if Walker’s original plan would have worked. “It had some pretty innovative things in it,” he said, though it “was changed significantly”. The principles, though, were Walker’s: the need for hubs and transfers.

“I don’t know how Dublin’s doing, but one of the principles here was that the new network wouldn’t cost any more than the old network. So if things are going to get better for some people, they have to get worse for others,” Mellor says.

“Nobody likes change. If you’re used to catching your bus at 8.25 in the morning and it goes via wherever and it’s suddenly 8.30am and goes via somewhere else, your routine is interrupted, and we’re creatures of habit.”

Dublin must get the project management right before BusConnects comes into force, Mellor believes. “People are blaming Jarrett Walker, but it’s not his design that was actually implemented.

However, “poor operator performance” is still causing capacity, punctuality and reliability “lapses”, while having to split journeys remains unpopular: “The number of transfers is small as a proportion of total trips. Customers don’t like having to do so at all,” said the regional council

Walker declined to be interviewed. Instead, in an emailed statement, he wrote:

“I have not worked in Wellington for six years, so I am not in the position to independently evaluate the causes of the problems in Wellington.

“I think GWRC has been open about the problems. The principles of the plan were sound but there were obviously problems with the implementation, including changing bus operating companies at the same time.”

However, bus reforms can be done well. New Zealand’s largest city, Auckland, used a Jarrett Walker/MRCagney model. Despite some hiccups, it has resulted in significantly less chaos than in Wellington.

“Auckland did a great job at implementation,” says Walker.