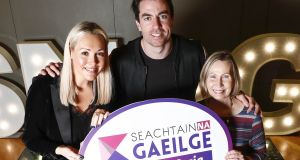 Linda Ervine started learning Irish eight years ago. Unlike the majority of people on this island, she didn’t learn it at school and it seemed alien to her at first.

Fast forward several years and she is now an Irish Language Development Officer in the predominantly loyalist area of East Belfast, is about to start a degree course in Queens University and has joined 2fm presenter Tracy Clifford, Dublin footballer Michael Darragh MacAuley and singer Sibéal Ní Chasaide as an ambassador for Seachtain na Gaeilge.

Speaking in Dublin at the launch of the annual Irish language festival, which takes place next month, she described her journey with the language.

“I am coming to it from a very different place. I didn’t have access to it in school. So, for me, at first, everything about it was so alien but now over the past few years it has become so familiar.”

“I fell in love with it. I was not a natural learner. I did the GCSE, I did the A-level and I did a diploma in Ulster University and I hope now to go on to do the degree in October.

Held for the first time in 1902, Seachtain na Gaeilge has evolved into an international Irish language festival. It is described as the biggest Irish festival in Ireland and the world. Last year, more than 30,000 events were organised over the two weeks.

Appetite for the language

Ms Ervine, who is hoping to see an Irish medium school in her part of Belfast in the coming years, says there is an appetite for the language in her community. “There are people who are hostile to it, they are a minority but there is a growing number of people. I’ve spoken to thousands of people over the last six years, the majority of them would be from the unionist community, and there’s a massive interest there.”

While the festival features a wide range of events - from concerts and drama to debates and exhibitions - it has language at its core.

At the launch, each ambassador explains how they re-engaged with the language.

For Dublin footballer Michael Darragh MacAuley, it was when he went back to college to train to be a school teacher. Immersion helped boost his confidence, he said.

Confidence is a “huge thing,” he says. “I was down in the Gaeltacht at teaching college I was nearly too nervous to try and talk to people but I couldn’t get away from it.

“Every shopkeeper was asking me how the Dubs were getting on: ‘Conas atá na Dubs?’” they asked.

“By the end of it, I was engaging (with the language) I had lost that element of fear and I was speaking a lot more fluently.”

2FM’s Tracy Clifford says a colleague asked her if she would be interested in learning Irish.

“Every morning we would have a little casual Irish class. The basics all came back to me but then we got into the nitty-gritty of things of pronouns. I just wanted to improve it,” Clifford says.

“Like everything else you have to put the work in. I didn’t open up a book and say I know it all again.

“It was like being at the Gaeltacht again. It was great to go into the Pop-up Gaeltacht and order a pint ‘as Gaeilge’, and say ‘okay cool, I did that, that’s great!’

When Clifford, who presents an afternoon radio programme, recorded a show in Irish, she was afraid of the reaction.

“I found the complete opposite. Everyone was so lovely to me about it. The messages of support and congratulations I got afterwards were so lovely and so special.”

MacAuley says it is never “too-late” to go back to the language.

“What I find with a lot of my friends who wouldn’t be líofa (fluent) in Irish is that they are still interested in the language. They always say I’d love to have more Gaeilge, I’d love to use it more.”

“There’s loads you can do to ‘up’ your Irish and it’s never too late. As with the ambassadors here, everyone has been on a bit of a journey - no-one has been fluent since day one.”