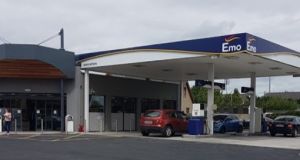 Dunne’s service station on the Abbeyleix Road in Co Laois where the incident is understood to have taken place. Photograph: Google Street View

The Defence Forces is investigating after a soldier accidentally discharged his assault rifle inside an army jeep parked at a petrol station in Co Laois.

The incident took place while members of the Defence Forces were taking a rest stop prior to providing armed backup to gardaí escorting a prison van from the high-security midlands prison in Portlaoise.

The incident is understood to have taken place in a Defence Forces Mitsubishi Pajero on Wednesday morning at Dunne’s service station on the Abbeyleix Road in Laois.

A spokesperson for the Defence Forces confirmed the incident, stating: “Prior to commencing a prisoner escort, there was a weapon discharged by one of the personnel on duty.

“Breaches of procedure and safety in relation to firearms are investigated as a matter of course, with disciplinary action being taken where warranted.”

The weapon involved was reportedly a high-powered assault rifle called a Steyr AUG, an Austrian-made weapon which entered service with the Irish Defence Forces in 1988.

It is the standard-issue infantry rifle used by the Irish Army.

“All members of Óglaigh na hÉireann are subject to the highest standards of weapons handling throughout their careers both at home and abroad,” the Defence Forces spokesman added.