Flower bans in hospitals: ‘A bouquet really means something to patients’ 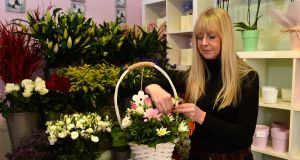 “Funerals and people being sick – that was our business back then,” says Michelle Moloney, a lifelong florist who has seen demand for flower deliveries to hospitals, once a lucrative part of the business, die off in recent years.

“We were up and down to Beaumont three times a day, because we are so near to it. That is gone. It was a lovely part of the business.”

Ms Moloney started an apprenticeship at the age of 16 and had to “sweep the floors for a year before I could even touch a flower”. She eventually took over Aideen’s Florist on Collins Avenue in Dublin 32 years ago, at the age of 23.

“When Beaumont opened [in 1987], a lot of people from the country would have been sent there,” she says. “So, we would have got a lot of phone calls, companies ringing up to send bouquets to clients or staff in hospital. It was a huge part of the business. It was constant business.”

Customers then typically paid between IR£10 or IR£20 a bouquet.

The dropoff was gradual, starting with the intensive care units, then other specialist units, until it escalated with general wards and entire hospitals banning flowers outright.

“There were a lot of flower shops in hospitals, in the foyers – Vincent’s, the Mater, Beaumont, they all had in-house florists,” says Ms Moloney. “They really suffered . . . they had to close down.”

Ms Moloney missed the hospital trade desperately when it began to tail off, “but nowadays you don’t”.

Ms Moloney says a few wards still take bouquets – she knows them all by heart – and their power to brighten up patients remains unrivalled.

“It is nice for somebody who is in hospital, especially somebody from the country, who has been transferred up, when somebody from their hometown sends them flowers to say they are thinking about them,” she says.

“Those people who wouldn’t have visitors all the time, a bunch of flowers really means something to them. People’s faces light up.

“This world has gone too politically correct, talking about the health and safety. You could do them in different packaging or find other ways to allow them in. It cheers patients up. It does their heart good.”