The Battle of Le Pilly was a short but bloody encounter which led to the destruction of a proud Irish regiment in October 1914. Video: Ronan McGreevy 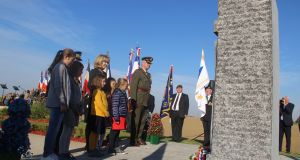 Irish Ambassador Patricia O’Brien was among those at the ceremony in Le Pilly. Photograph: Ronan McGreevy

It’s a long way to Tipperary for the children of École Publique Simone Veil in Herlies, a suburb of Lille.

Their heavily accented version of the music hall standard, turned into the most famous marching song of the first World War by Irish men serving at the front, rang out across the flat fields in northern France where so many from the country were killed 104 years ago.

In October 1914, 177 men from the Royal Irish Regiment, which recruited predominantly in counties Waterford, Wexford, Tipperary and Kilkenny, were killed in the Battle of Le Pilly.

Having initially taken the village of Le Pilly, now a suburb of Lille, the men from the 2nd Battalion of the Royal Irish Regiment became isolated from their supporting division. They were surrounded and either killed or captured.

The battalion diary was chilling in its succinctness: “Little evidence is available of what happened on this day.”

The battle claimed the lives of 29 men from Waterford, 27 each from Tipperary and Wexford and 13 from Kilkenny.

Among the dead were 16-year-old Pte Stephen Collins from Waterford city, one of four brothers to die in the war, and Capt James Smithwick from Kilkenny, a scion of the famous brewing dynasty who died from his wounds.

In brilliant autumnal sunshine on Saturday, at odds with the darkness of the events that occurred more than a century ago, locals made good on their promise to erect a memorial to the Irish men who died and were forgotten about for the most part – not just in their own country, but in France.

The mayor of Herlies, Marie-Françoise Auger, recalled that the village of Le Pilly had been razed to the ground during the German occupation in 1914, and the locals fled.

The centrepiece of the commemoration was a memorial consisting of a triptych. Each weighs two tons and is carved from La Pierre Bleue, a blue stone distinctive to southern Belgium and northern France.

The memorial depicts the silhouette of two soldiers, but a band of dark rock blanks out the helmets which identify the side they were on. The middle stone, in French, English and German, remembers all those who died at Le Pilly.

French military veterans and colour parties mingled with local schoolchildren and musicians. This was a day out for the whole community and had been in the planning for years.

The memorial is landscaped and has message boards telling the story of three days of carnage in October 1914. There is space nearby for coaches. Locals hope this in time will attract visitors to what is often called “the forgotten front”.

The Irish Ambassador to France, Patricia O’Brien, spoke of the Irish men at Le Pilly as “boys” who had been “excited by war, terrified by battle”. They had not won a great victory, but had instead endured a terrible defeat and it was right that they be remembered, she said.

It was a memorable day for the dozens of relatives from Ireland who attended the ceremony.

Husband and wife Christy and Nellie Phelan from Co Kilkenny did not know until six weeks ago they were related to two men who fought at Le Pilly. Mr Phelan’s grandfather Patrick was killed some weeks after the battle, while his wife’s great-uncle Michael Byrne was taken prisoner.

A lot of families didn’t talk about this in the past. They were ashamed. They are not ashamed any more

“We met a former French paratrooper who came up to us and shook our hand and thanked us for what they had done. The welcome we got was amazing,” Mr Phelan said.

Pauline O’Keeffe, a 16-year veteran of the Irish Reserve Defence Forces, read the poem For the Fallen by Laurence Binyon. She remembered her grandfather Pte James O’Keeffe, who was left for dead on the battlefield. A shell had buried him and his feet were sticking out of the earth. A German soldier only realised he was alive when he tried to take O’Keeffe’s boots off and saw his leg twitching.

“I never knew him, but I promised his memory that I would come here some day,” she said. “A lot of families didn’t talk about this in the past. They were ashamed. They are not ashamed any more.”

The monument is one of three unveiled this year on the Western Front to the Irish who died in France during the first World War.

In July a memorial was erected in the village of Essigny-le-Grand to the men from both the 16th (Irish) Division and 36th (Ulster) Division who were killed during the German spring offensive of 1918.

Last week men from the 6th Connaught Rangers, who were killed during the German Spring Offensive and were drawn mostly from the nationalist Falls Road in Belfast, were remembered on a new plaque in the village of Ronssoy.

1 Man unidentified in psychiatric hospital for 30 years may have DNA taken
2 Miriam Lord: Another dog’s dinner as D’Arcy jumps on the gravy train
3 The far right rises: Its growth as a political force in Ireland
4 ‘Insane’ gathering of hundreds of students in Galway condemned
5 US election: Everything you need to know about Tuesday’s presidential debate
Real news has value SUBSCRIBE