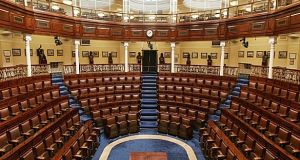 The helpline will be required to provide people with information on what behaviour constitutes bullying, harassment, or sexual harassment. File photograph: The Irish Times

The Oireachtas is to set up a helpline for employees and political party staff to deal with bullying or sexual harassment in Leinster House.

The Houses of the Oireachtas Commission agreed to adopt a dignity and respect workplace policy in July, which would cover how complaints about sexual harassment and bullying are handled.

The Oireachtas has now advertised a tender for a contractor to run a helpline, to act as a “first point of contact”. It will provide staff with advice on how they can make a formal complaint under the new dignity and respect policy and how to “draw down third party investigation services” from the Oireachtas, states the contract outline.

The helpline will be staffed during weekdays and will file annual reports to the Oireachtas on number of queries handled. Estimated cost of the contract will be €50,000 over five years, excluding VAT, states the tender.

The contract tender notes helpline staff will have a “listening brief” to provide information to the person raising a concern. Staff “do not get involved in any other way in the complaints procedure and are not advocates for either party”, it states.

The helpline will be required to provide people with information on what behaviour constitutes bullying, harassment, or sexual harassment.

The dignity and respect policy has been drafted, but will not be launched until the helpline is in place. A spokeswoman for the Oireachtas said it was expected a contractor would be selected to run the service by the middle of November.

The Oireachtas also plans to commission a survey on the prevalence of sexual harassment and experiences of inappropriate behaviour among those working in Leinster House.

Green Party TD Catherine Martin, who chairs the Oireachtas women’s caucus, said she had been assured a tender to hire a consultant to conduct the survey would be run in the comings weeks.

Ms Martin said the caucus had rejected proposals for an internal survey run by the Oireachtas, insisting the process had to be independent. The survey will cover all members, staff, members of the media and interns, she said.

“There are people who probably are concerned about what will come out. At the moment we don’t know. And that is not a safe workplace environment,” she said. The previous lack of a policy on workplace standards of dignity and respect was a blind spot, “but we are setting it right”, she said.