Decommissioned Irish ship ‘past its sell by date’ 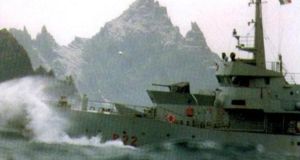 The LE Aoife was launched in 1979 and has travelled over 600,000 nautical miles in the course of fish protection patrols and other missions.

Ireland is proceeding with the planned donation of the LE Aoife to Malta to assist in humanitarian work despite reports that members of the armed forces of Malta described the recently decommissioned Irish ship as “past its sell by date”.

According to a spokeswoman for Minister for Defence, Simon Coveney, discussions between the Deptartment of Defence and the Maltese Ministry for Home Affairs and National Security are continuing with a view towards finalising a deal to donate the LE Aoife to Maltese.

“We are in active discussions with the Maltese authorities in relation to the transfer of the LE Aoife - we are going ahead with the donation,” said the spokeswoman, in response to queries whether the comments by the armed forces of Malta would impact on the deal.

According to a report in the Malta Independent online, members of the Armed Forces of Malta were concerned about the age of the LE Aoife which was launched in 1979 and has travelled over 600,000 nautical miles in the course of fish protection patrols and other missions.

Maltese military personnel are said to have raised concerns about the LE Aoife’s lack of capability to launch a small craft from its stern and the lack of a large holding area where it can accommodate migrants rescued while crossing the Mediterranean in small craft from North Africa.

“This donation of a military vessel beyond its useful service life severely reverses back the clock of things and is going to see history repeat itself. And it sets a very very bad precedent for other junk to follow being dumped on us,” a retired AFM source told the Malta Independent

Details of the planned donation of the LE Aoife emerged on Thursday when Mr Coveney met with Maltese Minister for Home Affairs and National Security, Carmelo Abela while attending a meeting of EU Defence Ministers in Latvia and agreed to a series of moves towards closer co-operation.

These include the transfer of the LE Aoife from the Irish Naval Service to the Armed Forces Malta Maltese as well as the training of Maltese military personnel in Ireland following a successful joint training mission by both countries as part of an EU training mission in Somalia.

Mr Coveney explained that the Maltese authorities require the ship for their armed forces to assist in the patrolling of the Mediterranean Sea to deal with the ongoing difficult refugee crisis in the region.

“Recent tragic events in that part of the Mediterranean have underlined the significant challenges which need to be addressed by the international community and Ireland is very keen to play an active part in this regard,” he said

Mr Abela expressed his country’s appreciation for the Irish donation which he said will be useful in supporting Malta’s work in border security and the migration crisis affecting the Central Mediterranean where Malta .

Malta routinely co-ordinates the rescue and takes in scores of refugees from the Middle East, North Africa and the Sahel, often in treacherous sea conditions, said Mr Abela following informal discussions with Mr Coveney on the margins of the Riga meeting.

“This donation from the Ireland will contribute additional capability to the Maltese authorities, and especially the Armed Forces of Malta in their humanitarian work ... it will help in bridging a gap in Malta’s naval capacity pending our future acquisition of a new Offshore Patrol Vessel,” he added.

The LE Aoife had been due to be put up for auction within the next weeks following its decommissioning from the Naval Service in January but auctioneer, Dominic Daly confirmed to The Irish Times that the auction had been cancelled earlier this month.