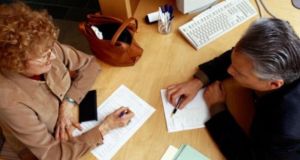 The Lansdowne Road pay deal, which was supposed to have settled public service pay policy until mid-2018, only came into effect in January. It is already showing signs of age

Speaking from the audience at an industrial relations conference in University College Dublin a fortnight ago, a senior official in the union representing lower-paid civil servants gave the first warning of the dangers facing the Government’s carefully structured public service pay policy. Derek Mullen, the deputy general secretary of the Civil Public and Services Union (CPSU) said the Lansdowne Road agreement was “creaking at the edges”.

“It is going to be difficult to keep people on message in terms of the content of the Lansdowne Road agreement. People see it as a start of pay restoration but are asking when they will see the main course,” he said.

The agreement effectively represented the beginning of a process of reversing the cuts imposed on 300,000 public service employees due to the economic crash. It provided for staff to receive about €2,000 in additional earnings over a two-year period.

However, growing expectations, fuelled to a degree by politicians highlighting a surging economy, have put the agreement under pressure.

Another speaker at the conference, Tom Geraghty, the general secretary of the Public Service Executive Union (PSEU), also indicated that pay policy may not be as settled as the Government anticipated. He warned if the economy continued to grow at rates of 7 per cent or more, this would trigger claims for an acceleration in the process of pay restoration.

“If the existing high levels of growth continue, you can absolutely take it for granted that we will be looking to speed up the process of restoration,” he said.

The proposals last week for resolving the dispute at the Luas light rail system, which involved pay rises of more than 18 per cent over 33 months, have also raised eyebrows.

Luas is essentially a public/private hybrid. The infrastructure is owned by the State, but the service is run, on a contract, by Transdev, which is a private company. However, the Luas pay proposals are way above the existing averages in both private and public sectors.

A survey of more than 500 private companies published at the UCD conference suggested that most would agree increases of 2.8 per cent this year.

The Luas proposal of more than 6 per cent for tram drivers on average is more than twice the level projected for the private sector. Within days, the National Bus and Rail Union said the Luas proposals represented a new industry norm and formed the basis for a claim for train workers. The union is looking for rises of up to 25 per cent.

Dublin Bus workers, as well as those in Bus Éireann, have already indicated that they will be seeking rises of 6-13 per cent.

If the Luas proposals were to form a new benchmark for wage claims, it could have significant implications for industrial relations. Already there appears to have been a spike in the number of disputes recently.

At one stage in recent weeks the Workplace Relations Commission (WRC) was involved simultaneously in dealing with Luas, Dart and hospital emergency department disputes. Days earlier it had been involved in brokering a resolution at the Mondelez/Cadbury plant in Dublin, where up to 1,000 jobs were under threat.

If there was to be breakdown in the Lansdowne Road agreement leading to further industrial relations difficulties, the pressure on the WRC could become intolerable.

However, despite the recent outbreak of disputes, the country is not witnessing a return to the 1970s. In 1979 alone, nearly 1.5 million days were lost due to strikes. Since then, the scale of unionisation among the workforce has steadily declined, except in the public service.

In reality, the main areas where strikes attract significant attention are transport, utilities or the parts of the public service dealing directly with the public. In many other sectors, falling union membership, advances in technology or fresh competition have reduced the leverage of workers.

In the current climate a number of potential flashpoints exist across the public service, mainly involving teachers, healthcare staff and gardaí.

One of the key elements in the various public service agreements since the crash was equal treatment of all the different groups. This became known as the “parity of pain” principle.

Equally, one of the key pillars of the Lansdowne Road accord was that, in a recovering economy, no public service group could be seen to do better than others. Already, when nurses in emergency departments were seen recently to have secured benefits in a deal aimed at avoiding industrial action, other health workers in the same units immediately lodged claims for equal treatment.

Another test may come in the weeks ahead on foot of a forthcoming report into An Garda Síochána, established under the Haddington Road agreement. Staff representatives have pressed for this process to deliver pay increases.

If this happens, it is difficult to avoid the conclusion that other groups will look with great interest at any awards.

Under the Croke Park deal of 2010, teachers were obliged to work an extra 33 hours a year and to carry out 43 hours of supervision and substitution duties. The Government considers Lansdowne Road to be an extension of the two previous deals, Croke Park and Haddington Road. However, the teaching unions, the ASTI and TUI, have rejected the Lansdowne Road accord.

The Haddington Road deal technically ends in June and a number of motions at forthcoming union conferences will call for teachers to cease working these hours at that point.

However under new financial emergency legislation, serious financial penalties could be placed on teachers who do not co-operate with these productivity measures. Last year, former ASTI general secretary Pat King warned his executive in a confidential memo that refusal to work the additional hours could result in a “full-blown dispute” and school closures.

Gardaí bodies also rejected Lansdowne Road and, since the start of the year, have not been working the 30 hours a year of free overtime provided for under the Haddington Road deal.

It remains to be seen what response any new government would take to these developments.