Lack of smiles all round: April Fools pranks few and far between in 2020

Fall in jokes and jibes surfacing, with a few exceptions, during coronavirus pandemic 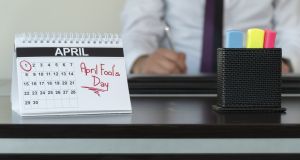 It appears as though people simply aren’t in the humour for pratical jokes this April. Photograph: iStock

Round about now, in the normal world, we would be publishing a story detailing all the “hilarious” April Fool’s Day pranks played by newspapers on their readers and brands on their customers.

The story would be long and would cause readers to smile, sigh or throw their eyes to the heavens before getting on with their days.

But this is not the normal world and there isn’t a lot of smiling going on. What has been striking in recent hours has been the almost total absence of April Fool’s Day jokes circulating.

That is not to say there have been none.

We must doff our cap to the Dublin Fire Brigade who, this morning, tweeted their thanks to Aer Lingus for the “safe delivery of specialist ‘truck mask’ PPE for our fire appliances”

The post said the personal protective equipment (PPE) would “help provide fresh filtered air to the engine and cab,” and it was accompanied by a picture of a fire truck wearing a face mask, obviously.

The Star was one a small number of newspapers in this part of the world that tried to fool their readers. They ran with an elaborate story about a new land bridge between Holyhead and Dublin under the headline “Rocky Road to Dublin”.

In the past few weeks a Golden Eagle has built its nest in one of the Dalymount floodlights - look out for him soaring over Dublin 7 pic.twitter.com/nzat5JaZ3n

Big thanks to @AerLingus for the safe delivery of specialist 'truck-mask' PPE for our fire appliances.

They will help provide fresh filtered air to the engine and cab.

Remember wash your hands often, stay at home, and maintain a 2 metre distance if you have to go to the shop. pic.twitter.com/idS19JAufI

Well, we say the Star “tried to fool” but in truth it did not try that hard to fool anyone, given that the reporter said the € 15 billion Brexit busting bridge would be painted green white and orange and named after the Wolfe Tones.

Cork-based online publication Cork Beo ran a story about the discovery of 11th century land deeds in the University of Copenhagen which had revealed that much of Cork city centre still belongs to the Nordic warrior tribes and their legal heirs.

Laois Today went with a story about a new app dedicated to helping Laois people to find love.

Bohemians Football Club in Dublin 7 posted a story about a Golden Eagle which has built a nest in one of the Dalymount floodlights.

But apart from sporadic attempts to lift people’s spirits, the jokes were thin on the ground.

There was the odd WhatsApp message purporting to be from official sources suggesting that a ban on the consumption of alcohol was being introduced while some parents went to great lengths to play tricks on their children by mocking up television news reports that schools were re-opening this week.

But what was clear in most quarters however was that the hearts weren’t in it this year.

“When times are good and brands want to show their humour and personality, it can be positive. A good stunt can humanise a brand,” Joe Baratelli, the chief creative officer at a Los Angeles-based advertising agency told Ad Weekly. “When things are serious, it’s probably not the time to be messing with people.”

In what appeared to be a serious post on Instagram, he told his 1.9 million followers that he had contracted Covid-19 and was in hospital being treated.

The post was quickly deleted and then revealed to be an April Fools’ Day joke and one which was - apparently - posted in an effort to raise awareness of the pandemic.