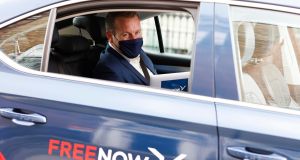 The lack of legislation mandating the wearing of face coverings in taxis has resulted in passengers “challenging” drivers over the issue, the head of a taxi company has claimed.

Niall Carson, general manger of Free Now, has called on the Government to legislate for the mandatory wearing of face coverings while in taxis.

Since July 13th it has been a legal requirement to wear face coverings while on public transport. Speaking in the Dáil later that month, Minister for Transport Eamon Ryan said his department was working on “extending the mandatory approach” to include the taxi sector. However, it has not yet been extended.

Mr Carson said the lack of regulation on the issue is endangering passengers and drivers.

“It’s mandatory in public transport and mandatory in shops but isn’t in taxis. The fact that the legislation hasn’t caught up is quite disappointing,” he said.

He said the Minister “committed to it in July, and nobody is under any illusion that there hasn’t been a lot going on, but from a driver safety point of view it is a genuine issue.”

Mr Carson did not have figures for the number of passengers who did not comply with the company’s own mask-wearing guidelines, but said anecdotally drivers were reporting passengers challenging the issue.

“We’ve had feedback that passengers have asked questions around it, like ‘Is it mandatory? Is it law?’ I think if there is anything the past few weeks have taught us is that the messaging, when it’s not mandatory, it leads to challenges,” he said.

Like many sectors, Mr Carson said the taxi industry had experienced great changes due to the Covid-19 pandemic. Business is down about 50 per cent year on year, while only about half of its 14,000 drivers have resumed work, but Mr Carson expects these figures to drop further due to Level 5 restrictions.

He said drivers are in a “really difficult position”, but Free Now, as a company, is “in a strong financial position” because of its investors BMW and Daimler.

The company has stopped accepting new sign-ups in order to “ sustain the livelihoods of the drivers who have always worked with us”, he added.

The purpose of trips has also changed, he observed. Previously, many customers used the service to attend social events, but with the reduction in public transport capacity, many drivers are bringing passengers to and from work or important appointments.

“We’re working with some of the large multinationals about bringing essential workers into the office and things like that,” he explained.

“One of the contracts with the HSE is around dialysis so we have people who need essential care, so we can get those service users in and out to get their treatment.”

He cited one example in which a daughter used the app to bring her mother to a hospital appointment. She shared the trip with her brother and the two of them were able to monitor and make sure their mother safely arrived at the hospital.

Asked about the issue of face masks, the Department of Transport said under existing regulations for the sector, drivers have the right to refuse a passenger who refuses to comply with a “reasonable request”, such as wearing a face covering.