Labour lines up outgoing INTO boss to stand in European elections 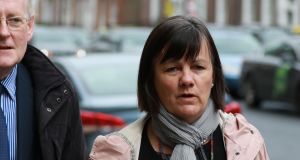 Sheila Nunan: “I obviously have been in organised labour all my life; this is a shift to political Labour.” Photograph Nick Bradshaw

A prominent trade unionist is being lined up by Labour to stand in the European Parliament elections, although some in the party claim the move could “look like desperation”.

Sheila Nunan, outgoing general secretary of the Irish National Teachers’ Organisation, is contesting the selection convention to be the party’s candidate in Ireland South. The constituency is due to increase from a four seater to a five seater at the European Parliament elections on May 24th.

Ms Nunan, who says she will step down from her INTO role in March or April, joined Labour in December after being approached by party leader Brendan Howlin. However, her entry into Labour has led to criticism from others who are hoping to stand under the Labour banner in Ireland South.

Former Clare TD Michael McNamara will also contest the selection convention, which is due to take place by the end of February. “Rejuvenating the party with retirees is a rather strange idea,” he said.

Ms Nunan, who lives in Glencullen, Co Dublin, and was a primary school teacher in Bray, said she talked to Mr Howlin after the Labour Party conference last November.

“I was on a panel on the conference on workers and subsequent to that I had conversations with the party leader Brendan Howlin. I have given this a lot of deliberation since December. There is a candidate selection piece first, and then there is a nomination piece.”

She officially joined the party in December. All aspiring MEP candidates for Ireland South must notify party headquarters of their decision to contest the convention by the end of this week.

Ms Nunan said she would spend the period ahead talking to Labour TDs and Senators, as well as rank and file members. The convention will be decided on the basis of one member, one vote.

“I obviously have been in organised labour all my life; this is a shift to political Labour,” she told The Irish Times. “Our values are very closely aligned, so I don’t see a wide gap. Timing was a central part of this. The timing is very good, the skills are aligned and the values are aligned.”

She cited Brexit as the key challenge those wishing to become MEPs will have to face, and said: “The post-Brexit scenario needs to be shaped in a social democratic fashion.”

Ms Nunan said she has a wide network to draw on from her time as general secretary and deputy general secretary of the INTO.“I bring considerable experience and skill for what is going to be an extremely important job.”

Mr McNamara, however, said a parachute candidate could backfire.

“I think a parachute candidate could look like desperation. We need to be relevant and have ideas that are relevant to people in rural Ireland.

When asked about claims that her Dublin base means she may face difficulties in the Ireland South constituency, Ms Nunan said of her home in the Dublin mountains: “As I step out the door I am in Wicklow. ”