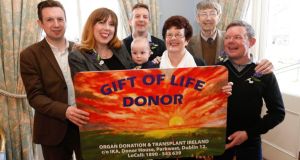 A Co Waterford family with a hereditary kidney complaint have had seven transplants between them in recent years.

Sean Murphy from Kilrossanty, Dungarvan, and three of his four children have all had kidney transplants.

The family has a hereditary kidney condition known as MPGN (Membranoproliferative glomerulonephritis).

Sean Murphy donated his kidney to his son Bob in 1984 not knowing at the time that both had the condition.

Last year included a brother-to-brother transplant between Bob and his brother Mahon in November.

Bob, the recipient of three kidney transplants, got married in January. In July he had a heart attack just a week before he and Mahon were scheduled to undergo a living donor kidney transplant at Beaumont Hospital.

The operation had to be postponed until Bob was well enough to undergo more surgery for his third transplant operation.

“It was Bob’s last chance,” said his mother Síle. “He had already had two transplants and because he suffered for more than 30 years from the illness, he couldn’t get a kidney from the pool. Luckily, Mahon was a perfect match. He is the only one not affected (by MPGN).

“After a long and complicated surgery and anxious hours of waiting they both emerged safely from theatre. Thanks to a great team at Beaumont Hospital, the transplant was a great success.”

The family appeared on The Late Late Show on Friday night.

Síle Murphy is encouraging others to become involved in organ donation.

“We are a whole family of people and we’re all still alive. I could be a widow with just one child if we didn’t have such good medical facilities.”