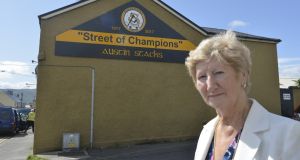 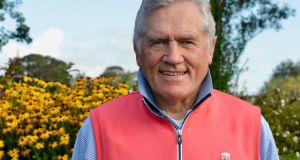 Cllr Michael Gleeson, winner of two All-Ireland medals. Of the Kerry team, he says: ‘I would give them considerable hope of being victorious. They are young and uninhibited.’ Photograph: Ronan McGreevy 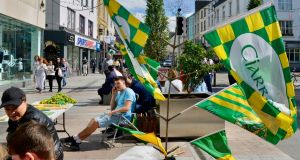 They don’t do false modesty in Kerry. And why should they, when they have won 37 All-Irelands?

The mural on the gable wall at the top of Rock Street in Tralee proclaims it is the “street of champions”. The mural was put there in 2017 to mark 100 years of the Austin Stacks GAA club, which used to be known as The Rock club.

It backs on to Urban Terrace, where 22 All-Ireland medals were garnered for the tightly packed row of 20 houses, and as one passerby commented, “we only count the senior ones”.

The medals were won over an 18-year period and two of the players, Micko Doyle and John Joe Landers, were on the Kerry team that won the county’s first four-in-a-row between 1929 and 1932.

The club’s first female chairperson, Máiread Fernane, says there used to be a local corner shop and the joke went that customers were asked to check their change in case they might find a stray All-Ireland medal in it.

There is a sense of novelty about this All-Ireland final in Kerry. The decision by the GAA to move the final from the third Sunday in September to the first means it is occurring the same week as the Rose of Tralee festival and the Kerry flags are mingling with the Rose festival lights. At the same time the tourist buses are still queuing up outside the Great Southern Hotel in Killarney.

No Kerry team has ever gone into an All-Ireland final as such underdogs. This is the other novelty factor about Sunday’s final. As Irish Times columnist and former Kerry footballer Darragh Ó Sé succinctly put it: “A lot of people are like me in that the heart is saying Kerry can win on Sunday but the head is telling you to cop on to yourself.”

Depriving Dublin of the five-in-a-row will be satisfaction in itself if Kerry win on Sunday. None of the players or panel were around when Offaly beat five-in-a-row chasing Kerry in the 1982 final, but Fernane remembers it like it was yesterday.

“We all sat on the train coming down after that match and we cried. We could not believe this happened to us,” she said. “I don’t want to be crying coming down on Sunday. I do think that Dublin team are like a machine, but we said the same thing about our four-in-a-row team.”

What she believes is at stake on Sunday is not just the All-Ireland, but whether or not the present Dublin team or the four-in-a-row Kerry team of the 1980s can call themselves the greatest team of all-time.

“We have the footballers. The question is – it is a year too soon for them? I’m not going up on Sunday to see the team beaten. If they hold it for the full 70 minutes I think we can win on football alone.”

At the opposite end of Rock Street, Kirby’s Brogue Inn is decked out in the ubiquitous green and gold. The chalk noticeboard outside states: “Brogue is to splendour grace and grandeur what Paddy Kennedy, Mick O’Connell, Mikey Sheehy, Maurice Fitzgerald, Colm Cooper were to elegant eclat and polished panache.”

Inside, proprietor Fiona Kirby says she only has to look to her brother to understand that Kerry has a chance. William won All-Irelands in 1997 and 2004. “You can’t write off Kerry any day of the week,” she declares.

In Killarney, the local stallholder is selling Kerry hats, flags and headbands. He says Kerry need “mud and rain” to win, though most Kerry people believe the county actually needs a dry sod to beat a more physically imposing Dublin team.

The town’s unofficial mayor (chairman of the Killarney municipal district), Cllr Michael Gleeson, also won two All-Ireland medals, the first one 50 years ago in 1969 and the second a year later.

He sees shades of 1955 when Kerry beat a highly-fancied Dublin team. Of the present Kerry team, he says: “I would give them considerable hope of being victorious. They are young and uninhibited. The canonisation of Dublin is a bit media-driven, with all due respect.”

He rates midfielder Brian Fenton as Dublin’s key man. Fenton’s father, also called Brian, is from Kerry. So, whatever the result, at least one person from Kerry will be celebrating on Sunday evening.

SVP urges election candidates to commit to eliminating poverty 13:29
Social Democrats to ‘radically scale up’ number of new homes 13:07
Election 2020 outtakes: McHugh’s as tough as nails 13:00
Girl settles case over head getting trapped in electric gates for €20,000 12:52
Election 2020: ‘We all think the health service is a lost cause’ 12:26