Kenny expected to trigger Fine Gael leadership race in May 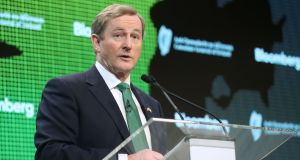 Taoiseach Enda Kenny will attend the Fine Gael parliamentary party on Wednesday evening but is not expected to outline his plans at the meeting. Photograph: Niall Carson/PA Wire

Taoiseach Enda Kenny is expected by senior Fine Gael Ministers to begin the process of electing his successor after the May bank holiday weekend.

Mr Kenny made clear Tuesday that he will attend the first meeting of the European Council after the triggering of article 50 of the Lisbon Treaty by British prime minister Theresa May.

Under questioning in the Dáil by Fianna Fáil’s Michael McGrath, Mr Kenny confirmed that he will attend the first European Council summit following the formal start of Britain’s withdrawal from the European Union, which will take place on March 29th.

The council will meet on Saturday, April 29th, to adopt the guidelines for the Brexit negotiations. When asked if Mr Kenny will be Fine Gael leader at that meeting, his spokesman said: “I assume so.”

This effectively means that the Taoiseach could only step down as Fine Gael leader the following week at the earliest, after the May bank holiday weekend.

The camps of both Minister for Housing Simon Coveney and Minister for Social Protection Leo Varadkar – the two front-runners to succeed Mr Kenny – had at one stage expected the contest to take place over the Dáil Easter recess, but now accept this will not happen.

Senior Ministers now say they expect Mr Kenny to stand down as Fine Gael leader after the April 29th summit, although he would remain on as Taoiseach during the three-week leadership contest.

It is understood Mr Varadkar has been urged by TDs to go with Mr Coveney to Mr Kenny to seek further clarity on his plans. It is seen as highly unlikely that either would go to the Taoiseach, either alone or together.

Mr Kenny had said he would deal with his leadership “effectively and conclusively” after his return from the US for his St Patrick’s Day trip. He will attend the Fine Gael parliamentary party on Wednesday evening but is not expected to outline his plans at the meeting.

However, some Fine Gael TDs – such as Louth’s Fergus O’Dowd – believe he should do so. The Taoiseach could be challenged from the floor.

In the Dáil, Mr McGrath asked Mr Kenny: “Who will be in charge when Ireland enters these negotiations in late May-early June. The people deserve a straight answer.”

Mr Kenny said: “I intend to make my point strongly on 29th April at the European Council meeting. We have prepared well for this. It is not a laughing matter, but deputy Michael McGrath will not be first to find out.”

He did not indicate if he would remain on as Fine Gael leader thereafter. Minister for Finance Michael Noonan this week said Mr Kenny should remain on as Taoiseach for the second stage of the Brexit process, up to the start of June. It has been speculated that there may be a second European summit, but this has not yet been confirmed.

Some sources close to the Taoiseach have also suggested that the leadership contest should not begin until the Dáil summer recess on July 13th.