Questions to former chief executive ruled out of order at committee

John Delaney has told an Oireachtas committee that legal advice he has received precludes him from answering questions on the about a controversial €100,000 payment he made to the FAI. Video: Oireachtas TV 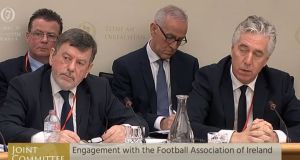 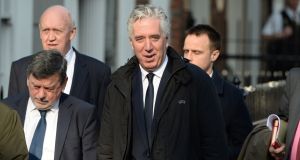 Former Football Association of Ireland (FAI) chief executive John Delaney has furnished details to an Oireachtas Committee of the €100,000 payment he made to the FAI in 2017 but has refused to answer any further questions about it or his former role in the Association.

In a four-page statement, Mr Delaney has said he was informed by in April 2017 the FAI would exceed its overdraft limit of €1.5 million and wrote a cheque to the association for €100,000 as the situation had become urgent.

He said in the statement that three people were aware of it: the director of finance; the honorary secretary and the then president.

Mr Delaney also said he had asked the director of finance at the time was there any reporting obligation. He said the money was repaid to him in June and matter did not come up at that month’s board meeting. He said that the first the board became aware of it was in March this year.

“On March 4 I informed the board of the FAI of the precautionary payment I made following a media query received from the Sunday Times.”

He said he accepted the situation arose “on my watch” but said he acted in the best interests of the association.

When members of the committee attempted to ask question of Mr Delaney about the loan, chair of the committee Fergus O’Dowd ruled the questions out of order. The first to do so was Social Democrats co-leader Catherine Murphy.

Under questioning from Fine Gael Senator John O’Mahony the president of the FAI Dónal Conway disclosed the report to review senior roles in the organisation was commissioned only in early March this year and completed by March 23.

Senator O’Mahony asked why was the new role now filled by Mr Delaney- that of executive vice president - not advertised. He contended the whole process was done very hastily.

When questioned by Fianna Fáíl TD Robert Troy, Mr Conway was not in a position to say who in the FAI had signed off on an inaccurate statement in March that suggested the Board were fully aware of the payment when that was not the case.

Mr Conway said the statement was signed off internally but could not say by whom.

Mr Troy responded: “A statement came out from the board saying the board was aware of the [issue] at all times and you did not know who signed off on it. Strange.”

Mr Troy also pressed Mr Conway on the report done by Jonathan Hall and Associates reviewing senior roles in the organisation. The review recommended the creation of a new role of executive vice president.

The Fianna Fáil TD, as colleagues had done, questioned Mr Conway closely on the very restricted time frame of the review into senior roles, which began in early March and was completed within three weeks. He asked was it not unusual that the announcement was made on a Saturday only hours before the international game between the Republic of Ireland and Gibraltar on March 23. Mr Conway disagreed.

Solidarity TD Ruth Coppinger was the first to specifically direct questions at Mr Delaney. Accepting that he cited legal reasons, she asked him about his new role as vice president of the FAI and also a board member of UEFA. She said was he still “double-jobbing”.

This is how John Delaney is going to play it at the Oireachtas committee.#FAI #dubw pic.twitter.com/FoWVnXS9E0

Mr Delaney responded that he had conversations about his role a few months ago. He said he had many duties including visiting 2,000 FAI clubs, attending functions and overseeing an organisations which has a turnover of Euro 50 million and 205 staff.

He said his new role was to use his strengths to bring big tournaments to Ireland.

Ms Coppinger asked him did he not believe he had a duty to the public to answer questions about the role. She also asked if it was true that his new combined salary was higher than the total prize money for the League of Ireland.

At that stage, Mr O’Dowd intervened to say that Mr Delaney did not have to respond to the questions and said the Committee had to stay within its remit.

Mr Delaney told the Oireachtas committee he is precluded from answering questions about a controversial €100,000 payment he made to the Football Association of Ireland (FAI).

The former chief executive of the FAI has told the committee that “prejudicial comments” made by its members about him, along with legal advice he has received, precludes him from answering questions about the payment.

Mr Delaney, now FAI executive vice-president, has told the committee on tourism and sport that “on legal advice, I am precluded from making any further comments at this hearing in relation to the finances of the association or my former role as CEO or the €100,000 payment either directly or indirectly”.

Citing “fair procedures and natural justice”, he has said he is not in a position to answer questions at this time.

Mr Delaney said “some members of this committee have made highly prejudicial public pronouncements about me personally” prior to his appearance, and he asked the committee to respect his position in light of the recent Angela Kerins case.

The Supreme Court is currently considering its final decision on a case taken by Ms Kerins, the former Rehab CEO, against the State and the public accounts committee. It has already decided the PAC acted outside its jurisdiction in its conduct of hearings into the Rehab affair.

On the €100,000, Mr Delaney said he is “truly saddened” Sports Ireland has withdrawn its funding. He has repeated the explanation offered by FAI president Donal Conway earlier this morning for the loan, which is that at an internal finance meeting on Tuesday, April 25th, he was advised that if all cheques and bank transfers were cashed, the FAI would exceed its €1.5 million overdraft.

“I expressed serious concern and surprise as to how the FAI could have arrived at this position. I recall thinking at the time, if I had been approached even a few days earlier, I may have been able to better address this issue.”

Mr Delaney said he wrote the cheque “as the matter was pressing” and “as a precautionary measure and to assist the FAI”. He gave it to the FAI finance director and told him only to lodge it if it became clear the bank overdraft was going to be exceeded.

Later, he told the honorary secretary and the president of the loan. He told the secretary that he was “very concerned and that I had to act quickly to assist the FAI”. Later, Mr Delaney said, he recalled asking the director of finance if the FAI had any “reporting or disclosure obligations arising out of the €100,000 payment”.

Ultimately the board was informed of the payment on March 4th this year, following initial queries on the payment by the Sunday Times.

“I accept that the overdraft limit issue arose on my watch as chief executive officer. I wish that it had not happened, but I acted in the best interests of the association,” Mr Delaney said.

Earlier, the FAI president said the sole reason Mr Delaney gave it a €100,000 loan in April 2017 was because it encountered a cash flow crisis that month.

Mr Conway has also told the Oireachtas committee the problem that arose was “exceptional” and the FAI would ensure it would never happen again.

Mr Conway suggested the board had approved of the loan but did not say when that approval occurred. “The board acknowledged the situation was exceptional,” he said, adding “repayment was made by [the] Association on June 16th to Mr Delaney.

He said no contract was entered into and no interest or charges levied on the association in respect of the transaction.

Mr Conway has already acknowledged this week the payment was not notified to Sport Ireland at the time, and was therefore not in compliance with the terms and conditions for drawing down State funding. It is on that basis that Sport Ireland, on learning of that admission, decided to withdraw funding yesterday.

Mr Conway then outlined to the committee the new internal control processes that have been put in place to ensure that situation does not arise again.

In relation to the new position established for Mr Delaney of executive vice president, Mr Conway told the committee this had been recommended by consultants commissioned to carry out a review of senior executive roles.

He said the review by Jonathan Hall and Associates had looked at the expansion of the role and responsibilities of Mr Delaney in recent years, including his senior roles with Uefa in Europe.

“Coupled with the demands of managing a growing organisation, it was not feasible for it to be placed on a single individual,” said Mr Conway.

He said the “unique influencing power and skills that are vested in the person of the former CEO” would lend themselves to this new role.