Fears ATMS will be taken off streets after thefts - Minister

CCTV has captured an ATM theft in Dungiven, Co Derry. Three men in balaclavas used a digger to remove the ATM from the wall of a petrol station before dropping it into a van and making their getaway. 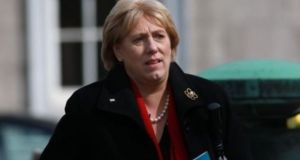 Minister for Business, Enterprise and Innovation Heather Humphreys said people were worried ATMs would only be available from 9am to 6pm. Photograph: Nick Bradshaw 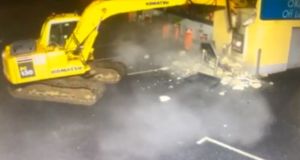 CCTV footage of an ATM machine being ripped from a wall with a stolen digger in Dungiven, Co Derry, this weekend. Photograph: Martin O’Kane/PA Wire

There are “genuine concerns” ATMs will have to be taken off the streets of rural towns and villages and moved indoors amid a spate of thefts, a Government Minister has warned.

Both the Garda and the PSNI are investigating whether there is any paramilitary involvement in the removal of 11 cash dispensing machines across the North and in Counties Cavan and Monaghan since December.

Minister for Business, Enterprise and Innovation Heather Humphreys, a TD for the Border constituency of Cavan-Monaghan, said it is clear the crimes are being carried out by “a sophisticated group of cross-border criminals”.

It is also “extremely worrying”, she said, how common the thefts are becoming.

Speaking to Northern Sound radio, she raised the prospect of banks taking cash machines off-street at considerable disruption to the rural communities being targeted.

“I know from speaking to people that there are now genuine concerns amongst local communities that we are heading towards a situation where ATMs will in future only be located inside premises and available from 9am to 6pm,” she said.

“This would be extremely disruptive for local residents and businesses.”

Ms Humphreys said a Garda/PSNI cross-border taskforce met on Monday and discussed the spate of thefts.

“We all want to see the perpetrators of these crimes brought to justice as soon as possible,” she said.

“In this regard, I am advised that a strategy is in place to investigate these crimes and to help local communities overcome the challenges that such robberies are presenting.”

Criminals behind the thefts will keep going until they are caught and communities should set up “ATM watch” schemes to protect them, an industry representative warned yesterday.

Ron Delnevo, European director of the ATM Industry Association, said experience in the UK and Europe shows robbers using diggers to rip cash machines out of walls will not stop until apprehended.

He was speaking after a cash machine was ripped from the wall of a filling station in Dungiven, Co Derry this week. Similar incidents have occurred in Antrim, Down, Fermanagh, Armagh and Tyrone since the start of the year.

Last week, a cash machine was stolen from outside a shop in Ahoghill, Co Antrim. A digger, which had been stolen from a nearby site, was used in the raid at the Nisa shop on Brook Street.

At about 3 am on April 1st, a phone call from a local woman work store owner Walter Millar. Thieves had rammed the Hitachi digger into his grocery store, lifted out the ATM, deposited it in a car and sped away into the night.

“I thought she was joking,” Mr Millar said, noting that the incident occurred on April Fools’ Day. “But she was deadly serious.”

According to Millar at the store in the rural village of Ahoghill, the gang stole it from a building site and piloted it through the village, before targeting the shop. Tearing into the wall, they hoisted the ATM and set it down in the car that already had its roof ripped off in preparation. The digger was left in flames.

Mr Millar said he remains shaken: “I was conscious that it could happen to us but you put it in the back of your mind, hoping it would never happen. Then it did.”

Meanwhile, gardaí in Co Donegal are on high-alert after an attempt was made to steal a digger from a yard at Pearse Road in Letterkenny over the weekend.

The lock was broken and a windscreen smashed between 5pm on Saturday and 7.30am on Monday morning.

It follows the theft of a digger from a Donegal County Council yard in St Johnston recently.

The Hitachi 26U digger was loaded onto a trailer in the yard and driven away across the Border towards Derry.

The €38,000 digger, which was rented from Watson Hire in Letterkenny, has still not been located.

Garda Sgt Eunan Walsh appealed to members of the public to be vigilant.

“Obviously we have to keep an open mind on these robberies or attempted robberies because of the recent spate of thefts of ATMs.

“The latest attempt to steal a digger happened in Letterkenny over the weekend when a machine parked beside the Letterkenny Community Centre was interfered with.

“We’re not sure if this is in any way connected with these ATM thefts but we have to consider all options,” he said.

He appealed to members of the public who notice specific behaviour late at night to contact gardaí.

“If someone is out late at night and they spot a digger being towed at three of four o’clock in the morning then we would ask them to contact us.

“This would be unusual. It might not be anything but we will investigate it and it is better to be safe than sorry,” he said.