Is a Sinn Féin-led coalition of the left still possible?

SF continues to pursue a left-wing alliance, but some are sceptical of its aims 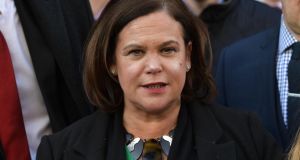 Sinn Féin leader Mary Lou McDonald and her senior TDs say they want to build a government of the left but also want to talk to Fianna Fáil about coalition. Photograph: Charles McQuillan/Getty Images

The warmth and colour evident as new TDs arrived in Leinster House with their families for the first day of the 33rd Dáil gave way to vitriol and bitterness as the main party leaders debated in the chamber on Thursday night.

For Sinn Féin, the day’s proceedings illustrated the difficulties it faces in attempting to form a government or enter coalition. McDonald and her senior TDs say they want to build a government of the left but also want to talk to Fianna Fáil about coalition.

Sinn Féin figures say they are genuine about pursuing both options but Martin – in a Dáil speech that trenchantly attacked Sinn Féin for its economic politics and associations with the IRA – sent a message to McDonald and to those on his own benches who want to deal with her: a Fianna Fáil-Sinn Féin coalition will not happen on his watch. McDonald responded by telling Martin he had a “narrow and bitter mind”.

She had emerged with the most votes for taoiseach – she won the support of 45 deputies, with 54 against her candidacy and 29 abstentions – thanks to support from left-wing TDs from Solidarity-People Before Profit, Rise and Independents4Change.

But Paul Murphy, the Rise Dublin South-West TD, told McDonald their support should not be “used to strengthen Sinn Féin’s hand in negotiations with Fianna Fáil; they are votes for an alternative government excluding Fianna Fáil and Fine Gael”.

In a Leinster House corridor, one Fine Gael TD stopped to consider the prospects of a left-wing government taking office. “It won’t,” the TD said, “we know it won’t. Because they are puritans.”

Sinn Féin figures acknowledge there are no bad outcomes for the party, no matter what happens over the coming weeks. They will either be in government pursuing their own policies or will be the dominant party of Opposition facing a Fine Gael-Fianna Fáil-led government or alliance, allowing McDonald build towards a goal of firmly establishing Sinn Féin as the largest party in the next Dáil and the lead party in government after the next election.

But they are also adamant Sinn Féin wants to be in government and reject suggestions that its goal is to push Fine Gael and Fianna Fáil together.

The aim is to build an alliance of the left – or a government of change, as Sinn Féin calls it – with smaller parties and groupings. In theory, a Sinn Féin-led minority or majority government not involving Fine Gael or Fianna Fáil is possible. A Dáil majority is 80 and the two Civil War parties have 72 seats between them.

In practice, getting every non-Fianna Fáil or Fine Gael TD – including Independent deputies of wildly different political philosophies – to either support a Sinn Féin-led government or abstain in Dáil votes to allow it take office, is impossible.

Some on the left have asked Fine Gael and Fianna Fáil, if they cannot form a government, to effectively stand aside and allow McDonald be elected taoiseach, a move that would require Varadkar’s TDs and Martin’s to abstain. Varadkar has made clear that is extremely unlikely to happen.

Ó Broin had acknowledged publicly a view commonly held in private in Sinn Féin: that it is not possible for the party to be in government without the co-operation of either Fine Gael or Fianna Fáil.

The party is still pursuing a left-wing alliance, however, but some of those it hopes to attract to that cause are sceptical.

Those on the left see Ó Broin – “the left face of Sinn Féin”, as one source called the housing spokesman – and Cullinane as perhaps more open to a left-wing minority government than others.

“Maybe they have different views within their party,” said one left-wing TD. “I’d say certainly some of them are going through the motions while waiting for Fianna Fáil to come around. But maybe some of them are at least seriously considering it.”

The argument from Sinn Féin negotiators that their preferred option is a sustainable government that can last a number of years in order to push through reforms has aroused the suspicions of some on the left that a Fianna Fáil coalition is the ultimate goal.

Some on the radical left envisage a much shorter-term arrangement. This would see some TDs of that political persuasion stay out of a Sinn Féin-led government but support it from Opposition, on condition it implements a number of policies, such as bringing the eligibility for the State pension back to 65.

“We would defy Fianna Fáil and Fine Gael to vote us down,” said one source, who said such an outcome would bring mass street protests that would help “push through” the desired measures.

Another general election would follow later this year under this scenario, since the left-wing minority government would not be able to pass a budget.

Solidarity–People Before Profit TD Richard Boyd Barrett said he would only enter government if there is a “much more extensive programme, a radical programme” than currently envisaged.

Catherine Murphy, co-leader of the Social Democrats, believes Sinn Féin is “serious” about forming a left-wing bloc but acknowledges Dáil arithmetic is against this taking shape.

“We are interested in talking about the detail of policy and where there can be a similarity of approach,” she said. “None of us know where this is eventually going to end.”

Cullinane, Sinn Féin’s Waterford TD, said his party’s aim is to build a broad policy platform that would encourage others on the left to support McDonald in future Dáil votes for the taoiseach’s position. “That is obviously the hope. We would do that by convincing people who stood on a platform for change,” he said, but cautioned any such platform would be “a long way” from an agreed programme for government.

“The programme for government will come once it is clear there is support for a taoiseach in a majority or minority government. We are saying to the others – let’s focus on what we agree on. When we met with the Greens there were six or seven priorities that we agreed with. What we are trying to do is make it more about the issues and that will put it up to the others – including those on the left.”

Smaller parties will be told by Sinn Féin their policies have more chance of being implemented by McDonald than Martin or Varadkar. Cullinane also said forming a left-wing alliance may serve as roadblock to an FG-FF coalition taking office. Smaller parties on the left may be dissuaded from joining Martin and Varadkar, he said, if they know they will face strong left-wing opposition across the Dáil.

According to this line of argument, the Greens or Social Democrats would be less likely to enter a so-called grand coalition on their own without the support of others on the left.

In practice, it could mean Fine Gael and Fianna Fáil would have to rely solely on Independents, making the government formation process more difficult.