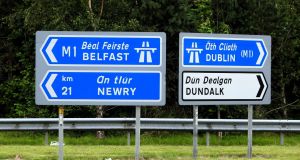 Irish unification will take place within a generation, “righting a historical wrong”, one of Britain’s best known historians and journalists has suggested.

Max Hastings, a former editor of the Daily Telegraph and Evening Standard and the author of multiple books on military history, said “such an outcome would serve the best interests of Irish people, save a rump of alienated Protestants, historically out of their time”.

He described partition as a “monstrous injustice” which was done at the behest of a million Protestants whose “forebears were ‘planted’ in Ulster by Oliver Cromwell’s followers in the 17th century”.

“Ever since, the Northern Ireland fragment has been governed by a so-called Unionist Protestant majority, whose sole rationale is the negative one of staying out of the Irish Republic by remaining attached to Britain,” he said.

Mr Hastings echoed comments made by the former British chancellor of the exchequer George Osborne that English people would not care if Ireland was united. Mr Osborne recently suggested Northern Ireland is heading for the “exit door” of the UK and “few people will care”.

Writing for Bloomberg, Mr Hasting said most British people “did not care a fig” for “John Bull’s other island” as George Bernard Shaw described Ireland.

“Polls show a slim majority in Northern Ireland for a referendum on Irish unity. If this comes, and should a majority choose to join the South, few English people will care.”

He accused Ulster Unionists, who ruled Northern Ireland for 50 years until the abolition of Stormont in 1972, of treating the Catholic minority “almost as harshly as US white segregationists in the old South treated African Americans.

“Lord Brookeborough, a Protestant grandee who served as Ulster prime minister between 1943 and 1963, said without embarrassment that, while he knew fellow landowners who employed Catholics on their estates, he would never do so himself.”

Mr Hastings worked as a journalist at the outset of the Troubles and witnessed the attack on Divis Flats in 1969 when it was sprayed by machine gun fire killing nine-year-old Patrick Rooney.

“Most of us English spectators of the Troubles deplored the IRA’s atrocities as much as we recoiled from institutionalised Protestant injustice.The next day, I heard Unionist ministers justifying police actions by pleading that they faced a Catholic uprising,” he said.

“The IRA later murdered hundreds of innocent people with bomb and bullet. Both sides had much to be ashamed of, before an uneasy truce was achieved by the 1998 Good Friday Agreement.”

Mr Hastings suggested the prosperity of the Republic made unification a possibility in a manner in which it was not in the 1960s.

“Thus, even many Northern Catholics saw little economic advantage in embracing Dublin. Today, that has changed remarkably. With the collapse of old Northern industries, especially shipbuilding and textiles, the economy is kept alive only by massive subsidy from Britain – £24 billion in public spending, against £14 billion collected in taxes.

“The South, meanwhile, has become a prosperous, confident society, and an enthusiastic member of the EU.

“Two minorities still see virtue in keeping Ireland partitioned. The first is composed of a diminishing number of stubborn Protestant Unionists, who dominate their own community, but would become marginalised in a united Ireland. Meanwhile, some Southern politicians are privately fearful of the perils of absorbing several hundred thousand embittered ‘Proddies’. Violence, so long an Irish tradition, remains very close beneath the country’s skin, and every Irish politician knows it well.

“The witty and wise English writer Sydney Smith did not much exaggerate when he wrote two centuries ago: ‘The moment the very name of Ireland is mentioned, the English seem to bid adieu to common feeling, common prudence and common sense’.”

Mr Hastings predicted that the Scottish will likely opt for independence, too, but the Welsh are unlikely to seek independence because of their economic dependence on the UK government.