‘For as long as anyone on the frontline needs it, I’ll keep going,’ says Paul McQuaid 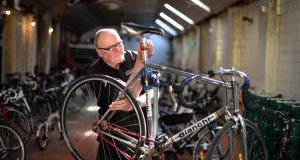 Dozens of bicycles, many that have not left the shed since they were bought in a burst of enthusiastic optimism on the bike-to-work scheme, have been finding their way to Paul McQuaid’s workshop at Usher’s Island in Dublin in the last few weeks.

Paul, who runs River Cycles just beside the James Joyce Bridge, had found his business stopped abruptly when the initial wave of coronavirus restrictions hit.

“I’ve been working on bikes for 40 years, and overnight business just stopped. The whole country got a collective fright and nobody had bikes on their minds.”

A former competitive cyclist, and member of the famous McQuaid cycling family, being idle doesn’t suit him.

“I’d be reading the papers and thinking what, if anything, could I do to help. It dawned on me that a lot of the front line staff would be in the demographic where they’d be likely to be taking buses or other public transport, and they’d be better off on bicycles.”

He emailed the human resources departments of the Mater, Beaumont and St James’s hospitals to ask if they thought staff might be interested in having their bicycles mended, for free.

“They all replied and said they thought people would be interested. That was three weeks ago and I’ve had more than a hundred bikes into me in that time.”

In some cases he collects the bikes on his own cargo bike, in others, where the bikes need only minor repairs or refurbishment people will cycle to the workshop and he will give them a bike to borrow, while theirs is being repaired. Two of his nephews are also collecting and delivering bikes for him.

Family members who are also in the trade, particularly his brothers Oliver and Kieron, have donated “a mountain of stuff” in terms of spare parts he says, and people in general have been “amazingly kind”.

“A gentleman rang me and offered to deliver me in two bikes as a donation. He used to race with my father in the 50s! He said he had two fold up bikes that he and his “better half’”used to use when they used to go off on holidays. They haven’t used them in years so they wanted them to go to a good cause,” he says.

“A little over a week ago I got a call out of the blue from a lady called Angela in Rathfarnham. Her husband died a couple of years ago and she wanted to donate his bike. The other day one of the delivery drivers from James’s came in his van and said he’d collect bikes and bring them back so that’d be a great help.”

The donated bikes will be refurbished and given to front line workers or used for parts for the refurbishments, depending on their state of repair.

The repairs generally range from flat tyres and new brake pads – “everyone neglects their brake pads” he says – to a general refurbishment, although he does get in the odd one that hasn’t seen outside of a garden shed in many years.

“I’ve one there at the moment; it needs to have everything done.”

The small blue bike he points to with an old leather spring suspension saddle could most kindly be described as ‘vintage’ but is possibly more accurately described as clapped out. It’s so old that standard brake leads don’t fit it, so Paul has had to order specific ones online, again at his own expense.

“That one belongs to a nurse in Glasnevin, it will take a while to do, maybe four hours, but we’ll get it going again.”

Most repairs are quick however such as a patch to a inner tube – and he believes in mending rather than replacing tubes where possible.

“Why would you discard a tube that just has a pin prick hole? Look at that patch, it’s beautiful.” The patch on the tube he holds up is indeed seamless.

Mostly he says he can get through 10 to 15 bicycles a day.

“I spend the morning replying to all the emails I’m getting, and then I work away on the bikes from about 12pm to 5pm.”

In recent days he’s expanded from fixing bikes for hospital workers to repairs for fire fighters and gardaí.

“For as long as anyone on the front line needs it, I’ll keep going.”

Having this work to do has been uplifting and often moving, he says.

“I’m normally a pretty optimistic person, but in this situation it’s hard not to be pessimistic. You see some of these people coming in, doctors, nurses, porters and consultants, and they are so haggard-looking. But I love what I do and I’m very lucky to be able to fix bikes for these people. There’s no comparison between sitting in a car and the joy of cycling. Everyone should have a bike in their life.”

Angela Keogh had been looking for a home for her late husband’s bike for some time.

“Joe died very suddenly of a heart attack just over two years ago now. He was a cyclist all his life and he had only retired three years so it was very unexpected.”

Up until his retirement from the Dublin Institute of Technology in Kevin Street, he had cycled to work every day from their home in Rathfarnham.

“He worked in Kevin Street for 50 years, if you can imagine that, he was a physics technician. He started working there when he was 16, but he still cycled every day after he retired down to the gym in Rathmines three times a week, and to the shops.”

However, after his death, Angela says, she didn’t know anyone who wanted or needed his bicycle.

“The poor bike just sat in the garage. I thought I might pass it on to someone who wanted it. I didn’t want to sell it, because I didn’t want to make a profit from it, but I just thought someone might come along at some stage who would really like a bike.”

When she heard that Paul McQuaid was refurbishing bikes for frontline workers she realised it was the ideal solution.

“I was absolutely delighted to be able to support this and when I told Joe’s brothers and our two daughters, they were delighted too. It was a poignant moment when Paul came to collect it, but Joe had a very generous nature and he would have loved that this is where his bike is going to.”

Emma Gorman, a physiotherapist in the Mater Hospital, cycles to work from Beaumont every day. She had begun recently to notice the chain on her bike was getting stuck and jerking as she cycled.

“At first it was just annoying, but it got worse and I could feel I was starting to lose control of the bike and it was becoming dangerous. I borrowed my sister’s bike for a while, but, well it’s like wearing someone else’s shoes. I was stuck on the bus for a couple of days, but I really missed the bike.”

Around this time she saw an internal email with Paul McQuaid’s offer to fix bikes.

“I rang Paul and he came to the conclusion the gears were slipping. I dropped it into him and he did a whole service – the gears, breaks, cleaned the whole thing up. There was a lot of what you might call ‘general neglect’.

“I collected it a few days later and he wouldn’t take any payment, I tried to insist he take the price of a cup of coffee, but he wouldn’t even do that .”

Based in the hospital’s intensive care unit, she says her daily bicycle trip gives her time to adjust between work and home.

“The cycle home really helps clear your head, particularly at the moment,” she says. “We are still preparing, waiting for the surge, it seems the efforts to flatten the curve are working. But we have had a patient who was Covid-19 positive discharged from the ICU. It’s wonderful to see someone going home.”