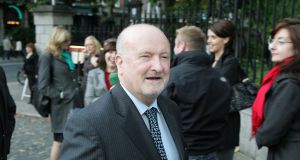 Former political adviser Paddy Duffy: “I believe that there are Irish people who would be interested, quite possibly, in maybe co-investing in Crimea and also in Ireland.” Photograph: Frank Miller 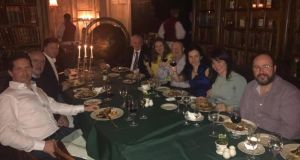 The Irish delegation dined at the elite restaurant Cafe Pushkin, which is renowned for its classical Russian cuisine.

Members of an Irish trade delegation to Moscow last month, including a former top adviser to former taoiseach Bertie Ahern, discussed hotel investments in Crimea, the Ukrainian territory currently subject to international sanctions since annexation by Russia in 2014.

European Union companies and citizens have been banned from buying Crimean companies or property; or supplying, and investing in energy and infrastructure projects there since Russian military forces seized control of the Black Sea peninsula in March 2014.

The discussions about future Crimean investments took place on the margins of a day-long Irish-Russian “Development of Trade-Economic and Investment Co-operation in the Conditions of Brexit” conference, held on December 1st.

The Irish ambassador to Moscow, Adrian McDaid, and Moscow-based staff from Enterprise Ireland were invited to the Sheraton Palace gathering, two miles from the Kremlin, but did not attend.

The gathering was partly organised by Delovaya Rossiya, and was co-chaired by Boris Titov, the Kremlin’s business ombudsman who announced in November that he would be running in the March elections against President Vladimir Putin.

The Irish delegation, which spent three days in Moscow and St Petersburg and paid their own travel costs, included Mr Ahern; but the former taoiseach told The Irish Times that he neither sat in on any meetings about Crimea nor met any Kremlin officials.

The Moscow and St Petersburg trip was organised on the Irish side by Olga Shajaku, a Russian solicitor based in Dublin for the past 20 years, and Ann Harrington, managing director of Trading House Consultancy Ltd.

The delegation, according to a list seen by The Irish Times, also included Nick March, managing director of Reybeverages Ltd, and Daragh Sharkey, director of business development at health tech firm Novaerus.

In an email answer to questions, Mr Ahern said he was still involved in peace talks in Kiev with the non-profit organisation Crisis Management Initiative and believed “there is hope” sanctions could be lifted next year.

A former member of the Russian parliament, the Duma, Mr Nazarov chairs property developer GC Granelle, which is currently building 250,000sq m of housing in Simferopol, Yalta and Sevastopol in Crimea.

Mr Nazarov said the negotiations with the Irish delegation touched on construction and hotels in Crimea, but they also discussed a far wider range of projects in Russia and in Ireland.

“The Irish businessmen see great potential for the development of their projects on the peninsula [Crimea],” said Mr Nazarov, who was optimistic that deals to invest €100 million in Crimean hotels by international and Russian investors could be signed at the fourth Yalta International Economic Forum.

“They understand that competitive niches need to be occupied now. Therefore, we invited them to familiarise themselves with the investment potential of Crimea. A business delegation will come to the peninsula as early as the beginning of 2018,” he said.

Mr Martin, chief executive Marcon Capital, said he had talked about raising a fund to co-invest in real-estate projects in Russia and Ireland in “a very fruitful and positive meeting” with Mr Nazarov.

In relation to separate investments in Crimea, Mr Martin, who is also a director of Prime Active Capital, said: “I think Crimea certainly possesses an opportunity in the future when the political landscape has improved somewhat.

“We would look at anything that is sensible. Billions are being invested now in Crimea, including in a new bridge authorised and instructed by Putin, and beautiful ports and it will interesting to see what happens.”

Ms Shajaku said the trip was “very exploratory” – “But a number of memorandums of understanding were reached on co-operation in the fields of agriculture, the supply of medical equipment and alcohol products.”

Ms Harrington, who is also a singer who has performed at the Electric Picnic festival, said the organisers were “not political at all”. They were “a completely commercial operation” trying to match companies from Ireland with Russian counterparts, and no more, she added.

Ms Shajaku, who brought 30 Russians from Delovaya Rossiya to Dublin in March, said: “Sanctions won’t be there forever and we do believe these barriers may be lifted shortly. We think there is a phenomenal opportunity between our two countries.”

The Irish group was among 100 people who attended the one-day conference, hearing from Mr Ahern and Nikolay Vukolov, deputy director at the Russian Direct Investment Fund (RDIF), the Kremlin’s sovereign wealth vehicle.

The RDIF, which is headed by Putin ally Kirill Dmitriev, has been sanctioned by the United States over Russia’s interference in the Ukraine conflict. Listed attendees included a representative from VEB, the Russian development lender sanctioned by the US and the European Union.

The Irish delegation also met Dmitry Sazhin, deputy head of Europe and America department at Russia’s economic ministry, who spoke about the prospects of boosting Irish-Russian agricultural and high-technology trade.

“I believe that there are Irish people who would be interested, quite possibly, in maybe co-investing in Crimea and also in Ireland. That would probably be in the hotel business,” Mr Duffy told The Irish Times.

“If we were going to the Crimea, we would be going as individual citizens and we are free to go and meet whom we want. Business is something different. If business is to be done anywhere, it has to be done within the strictures of the law – whether that’s national or international. All of those rules have to be abided by and we would be very clear about that.”

Mr Duffy added: “Bertie spoke for about 15 to 20 minutes, [about] the competitive advantages we have in Ireland, the prospects for development here and abroad. We want to bring business in.

The group had dinner that night at the elite restaurant Cafe Pushkin, which is renowned for its classical Russian cuisine, and some of the party went on a tour around the Kremlin and Red Square.

On December 2nd, the delegation travelled to St Petersburg, Russia’s second city and Putin’s hometown, where delegation members met trade union officials and visited some of the city’s main landmarks.

Duffy said he and his partners have been in touch with Russian counterparts since the trip. “We had somebody from agri food, somebody from the medical devices and technology area, somebody from investment, finance and property,” he said.

“So we all met people involved in those areas and they have all been in contact with us since we have been back. In fact, there are a number of key projects that we have been in touch about every day since we came back.

Mr Duffy said he and two others may travel to Yalta in Crimea in April if invited. “Everything at this stage is entirely exploratory,” he said. “People are committed to building personal relations to see if there are possibilities of mutual business. It’s all very initial stage.”

He said there was no chance that Mr Ahern would travel to Yalta. The former taoiseach has travelled to Kiev as an unpaid facilitator with Crisis Management Initiative in a bid to end the violence in eastern Ukraine involving Russian-backed separatists.