Milly Tuomey (11) spoke of ‘killing herself’ in HSE form

Response ‘would have warranted an immediate assessment, treatment and support’ 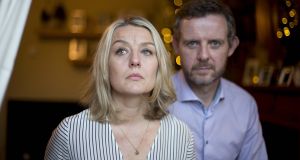 Fiona and Tim Tuomey are continuing to campaign for the establishment of an independent Suicide Prevention Authority. Photograph: Tom Honan.

Eleven-year-old Milly Tuomey said she often could not get her mind off the thought “of killing myself” when responding to a Health Service Executive questionnaire which she filled out less than a fortnight before she died by suicide.

The child’s answers “reflected high risk of self-harm and suicide”, according to Prof Ella Arensman, the director of research for the National Suicide Research Foundation, who was as an expert witness in the November inquest.

On November 8th, 2015, Milly, from Templeogue in Dublin, posted on Instagram of her intention to die on a certain day the following month. She died on January 4th, 2016, one day before her first scheduled appointment with the Child and Adolescent Mental Health Service (CAMHS).

The family’s GP Ronan Keogan wrote a referral letter on December 8th seeking an appointment with mental health services for the child and faxed it to the nearest CAMHS centre, the Lucena Clinic in Rathgar.

“Milly’s name did not go on a waiting list for an appointment,” Dr McDonald wrote in a deposition for the inquest that was held in November. The date given was for almost one month later, on January 5th. A letter was sent to the Tuomeys on December 14th.

The letter included consent forms for the parents, a child behaviour checklist also for the parents; and a questionnaire for their daughter. The forms were filled and hand-delivered by Fiona Tuomey on December 22nd, and delivery acknowledged.

In the Youth Self-Report Questionnaire, the Tuomeys’ daughter was asked a series of questions, to be answered in a range of 0, 1, and 2. Zero was defined as “not true”, 1 as “somewhat or sometimes true”, and 2 as “very true or often true”.

Milly marked 2 when asked, “I can’t get my mind off certain thoughts; (describe).” In neat handwriting, she wrote about “about killing myself”. She also marked 2 for the comment “I deliberately try to hurt or kill myself”.

The forms were reviewed by administrative staff in Lucena: “Rating scales are processed and scored by admin staff,” Dr McDonald stating, adding that they had been “scored on December 30th, 2016”.

In a letter to the coroner on June 3rd, 2016, Dr McDonald: “The [forms] are reflective of the information contained in the referral letter from Dr Keogan, ie, concerns around low mood, low self-esteem and thoughts of self-harm.”

In this letter, Dr McDonald also states that the child died on Tuesday, January 5th. This is a factual error, as she died the previous day. Fiona and Tim Tuomey told The Irish Times that Dr McDonald also gave this date also while speaking at the inquest in November.

Giving her opinion after having seen the questionnaire, Prof Arensman said: “The combination of the escalation of self-harm methods over a short time period and high scores on the internationally validated screening questionnaires, which Milly had completed, reflected high risk of self-harm and suicide, and therefore would have warranted an immediate full biopsychosocial assessment, followed by the required treatment and support.”

On New Year’s Day 2016, Milly left the living room where her family were watching the Transformers movie. She was found some time later by her older sister, Daisy. She died on January 4th, 2016, in Our Lady’s Children’s Hospital, Crumlin.

The Tuomeys are continuing to campaign for the establishment of an independent Suicide Prevention Authority. They handed 30,000 signatures into the Department of Health on Thursday of this week.