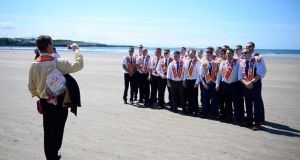 Still image from When Orangemen Cross the Border, a three-minute video Bryan O’Brien shot last July about the largest Orange Order march in the Republic.

The chief video journalist at The Irish Times has won an award at the prestigious UK Picture Editors’ Guild (UKPEG) awards.

Bryan O’Brien was named UKPEG Videographer of the Year at a ceremony in London on Monday.

The Kerry-born photographer won the prize for When Orangemen Cross the Border, a three-minute video he shot last July about the largest Orange Order march in the Republic. It takes place every year in the seaside village of Rossnowlagh, Co Donegal.

Over 4,000 pictures and videos were submitted by more than 400 participants, with entries judged by a team of 10 picture editors.

Commenting on his award, Mr O’Brien said: “I’m very honoured to receive this very prestigious award as it is a competition among the best photographers from Ireland, England, Scotland and Wales.”

He added: “There was a huge entry and the awards are distinctive as the panel of judges consists of working picture editors from national and regional newspapers and international photoagencies. It makes it special to win an award that has been judged by your peers.”