Event is ‘wonderful opportunity’ to look back at 1916 and to look forward, editor says 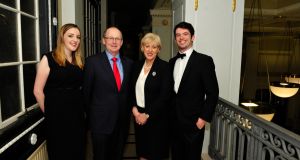 Speaking at the launch of the competition at the GPO on O’Connell Street, Dublin, The Irish Times editor Kevin O’Sullivan said it was an appropriate theme for the 55th year of the event.

He said the debates would be a “wonderful opportunity” to look at the events of the Easter Rising but also to look forward.

He said The Irish Times would have a two-pronged approach to 1916, looking back at the events that happened but also looking to assess the future and “what is for the greater good in terms of our citizens”.

“The place of The Irish Times debates over the last 55 years has not been insignificant,” Mr O’Sullivan said.“It has been a platform for wrestling with big themes.”

This year’s event was launched by Minister for Arts, Heritage and the Gaeltacht Heather Humphreys who recalled how she had been involved in the school debating team in Cootehill, Co Cavan.

She praised the recent Children of the Revolution supplement of The Irish Times which had been circulated to schools and was the largest print run in the history of the newspaper.

Ms Humphreys said Ireland’s maturity as a nation meant a fresh perspective had been possible through the passage of time.

“We have the freedom 100 years afterwards to delve into the various narratives,” she said.

The first debate to take place in the series was on the theme: “This House believes that the commemoration of the 1916 Rising improves the Republic.”

The debates are being held in association with Ireland 2016 and will take place over the coming months.