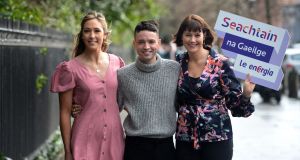 Just days before her team faces England in the 2020 Six Nations Eimear Considine lined out with well-known media figure and writer James Kavanagh and television presenter Gráinne McElwain for the launch in Dublin of the 17-day Irish language celebration.

Seachtain na Gaeilge runs from March 1st to 17th and features events organised by community groups, schools, local and city authorities, cultural and sporting groups around the country and beyond.

“I think my Irish teacher would laugh now if she knew I was a Seachtain na Gaeilge ambassador!” Ms Considine said.

“I’m not saying that I’m fluent or perfect at it,” she said, “but I like the idea of speaking it and keeping our language alive and that’s my grá for it.”

“When you play rugby for Ireland you are playing for your country that goes hand-in-hand with speaking Irish.”

Each ambassador pledged to promote the language during the festival which features an eclectic range of art forms.

“When we are away the girls often chat in Irish,” Ms Considine said, before pledging to record a video with her teammates as Gaeilge.

“Give it a try and give Irish a chance. My main message is that if you clear any preconceptions you might have about the language from your mind and start from scratch you will enjoy it,” she said.

The festival, which aims to bring the Irish language to new audiences and foster community building, selects ambassadors with different standards of Irish in order to encourage people of various levels to get involved.

Speaking at the event James Kavanagh said his view of the language has changed since he was in school.

“I look at Irish now in a more romantic sense now that I am out of school. I think it has to be spoken to survive and I think people in my age group are becoming more and more interested in it.”

“Many are almost regretful that they didn’t take more of a part in it so much in school. Seachtain na Gaeilge allows you to take part in it now in your adult life.”

For his part he has pledged to record a song in Irish every day during the festival.

He called on the public to follow the ambassadors’ social media accounts and to check the snag.ie website to stay abreast of events during the festival.

Gráinne McElwain said people do not have to be fluent to participate in events.

“If you happen to have very little Irish, no Irish or be a fluent Irish speaker, there is an avenue there for you – just ‘bain triail as’ (try it).

“There is something for every single person. It’s not sitting in a classroom. There are so many events there that you can get involved in from discos to céilís.

“Do explore. Re-engage with it! Empower yourself by doing it. It is a beautiful language, it is one to be used and I would encourage everyone to use it.”