Irish role in building US transcontinental railway to be marked 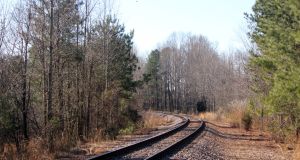 Among those who worked on the railway were thousands of post-Famine Irish emigrants. File photograph: Getty

On this day 150 years ago one of the most important events in American history took place.

A golden spike was driven into the ground to mark the completion of the first transcontinental railway, thus uniting a country that had been bitterly divided by civil war.

It was a mammoth task, but one which took only seven years to complete.

The railway ran from Omaha in Nebraska to Sacramento in California – a distance of 2,858km (1,776 miles), across some of the most difficult terrain in the United States.

On May 10th, 1869, east met west at Promontory Point in Utah, an otherwise undistinguished place north of the Great Salt Lake.

Among those who worked on the railway were thousands of post-Famine Irish emigrants who laboured alongside Chinese workers drafted in to make up for the labour shortages across the continent at the time.

Fifteen thousand Chinese labourers were employed on the stretch of track from Sacramento, California, to Promontory Summit.

They were joined by freed slaves, Mormons and other European immigrants.

“The four forward men seized the 560-pound, thirty-foot-long rails, while the four rear men slid the rails to the rollers on each side of the iron car. The lead ironmen ran forward. “Down, shouted the foreman,” ran one contemporary report.

On Friday, Irish Ambassador to the United States Daniel Mulhall will participate in events to celebrate the 150th anniversary of the Golden Spike. Mr Mulhall said the Irish emigrants who worked on the railways had made a “magnificent contribution to the making of modern America”.

He said they were drawn from the six million Irish emigrants who left for the United States between 1840 and 1900.

“They and their descendants became part of the fabric of modern America but they never forgot their ancestral Irish homeland. Their achievements in America have been a perennial source of inspiration to the Ireland they left behind,” said Mr Mulhall.

The celebrations are being organised by the Golden Spike 150 Commission, a body constituted by the governor and legislature of Utah to carry out the celebration and commemoration of the 150th anniversary. The theme of the celebrations is focused on the railway worker whose labour and sacrifice joined together a new America.