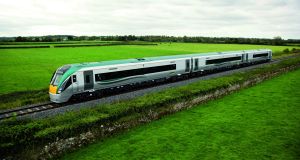 Irish Rail is eager to expand and improve the national rail network and has put forward a number of detailed proposals to a variety of State agencies, chief executive of the company Jim Meade has said.

Addressing the Oireachtas Committee on Transport on Tuesday, Mr Meade said the company could rebuild the railway from Dublin to Navan in just three years.

He said it had put forward proposals to open a number of stations between Ennis and Limerick, as well as the Limerick to Foynes line, and wanted to increase frequency to 15-minute commuter trains on the Cork to Midleton line.

These were in addition to Dublin-centric projects such as the National Train Control Centre at Heuston Station and electrifying commuter rail in the Greater Dublin Area, he said.

Mr Meade told the committee that Irish Rail had “highlighted further opportunities to develop the role of rail” as part of its engagement with the Department of Transport.

* Advancing plans for new stations on the Ennis-Limerick line to serve Limerick Institute of Technology, the University of Limerick, Shannon and other areas around Limerick City as part of the Limerick-Shannon metropolitan area strategy.

* Double-tracking the Athenry to Galway line.

* Building “climate resilience” with specific focus on the necessary coastal protection for the Dublin to Rosslare line.

* Options for double-tracking on lines such as Portarlington to Athlone and Limerick to Limerick Junction, and the development of proposals for further electrification of the network.

In a question-and-answer session Mr Meade said Irish Rail would be “happy” to engage in a two-phased reopening of the Athenry to Tuam and Tuam to Claremorris line, if that was to be the recommendation of an ongoing all-island strategic review of the rail network.

He said the company saw “an urgent need” in the Post-Brexit era for rail connectivity to the Ports of Waterford and Foynes (when reconnected), among others. “We are confident that many new business opportunities would arise if it were indicated that this infrastructure was to be made available,” he said.

Mr Meade told Senator Timmy Dooley the possibility was there to have a railway “horseshoe” around Limerick on lines that were already in place, utilising new stations.

However Mr Meade said opening a rail link to Shannon Airport would involve land acquisition and could cost hundreds of millions of euro.

While Mr Meade said Irish Rail was keen to expand and improve the network, he reminded TDs and Senators that Irish Rail was not the decision maker on the requirements for public transport – a role which was held by local authorities and the National Transport Authority.

Nor was Irish Rail the funder of expansion projects, he said – a role held by the Department of Transport.

Glenn Carr of Rosslare Port said the port was expanding rapidly since Brexit. Continental freight was up by 447 per cent, he said, while UK freight had fallen by about 49 per cent.

He said improvements to the road network from Oilgate to Rosslare were necessary.