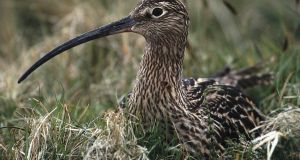 The curlew, an endangered species in Ireland. 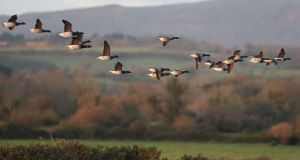 ‘The natural infrastructure of biodiversity, fundamental to mitigating risks of climate change and supporting our wellbeing, health and economy, is being eroded at an accelerating rate,’ said NBF chairwoman Prof Yvonne Buckley. File photograph: Nick Bradshaw 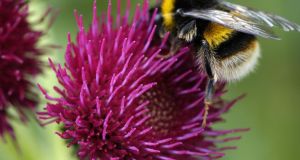 A third of wild bee species are threatened with extinction while two-thirds of wild bird species are red- or amber-listed ‘of conservation concern’. File photograph: Jane Powers

Ireland continues to experience accelerating biodiversity loss, with a third of wild bee species threatened with extinction while two-thirds of wild bird species are red- or amber-listed “of conservation concern”, according to leading ecologists and nature conservation experts.

In addition, 85 per cent of internationally-important habitats are in “unfavourable” status, limiting benefits people can derive from them such as their ability to capture and store carbon, the experts have warned in an independent evaluation of the Government’s national biodiversity action plan.

In a report delivered to Minister of State for Heritage Malcolm Noonan, the National Biodiversity Forum (NBF) concluded environmental indicators still show “a very disturbing picture of losses and declining trends” in addressing Ireland’s biodiversity emergency over the past five years.

Ireland does not adequately fund “even basic environmental compliance” while “the biggest transgressor of environmental law in Ireland is the State”, it concluded.

Political failure to adequately fund the National Parks and Wildlife Service (NPWS) and to ensure sectoral policies work with nature rather than against it means the vision of the 2017-2021 plan “is far from being reached”, the report said.

Mr Noonan said: “The findings – while stark – outline the scale of the ambition and the strategic approach that is needed to deliver on our shared goals for nature.”

As the NPWS works to develop the successor plan for 2022-2026, he pledged to consider the findings carefully to ensure it “delivers real impact”.

While people returned to nature during the Covid-19 pandemic, it pointed out researchers were highlighting the link between the destruction of nature globally and the release of zoonotic diseases such as Covid-19.

“Halting the losses of wildlife populations and ecosystems and restoring them in the coming years is critical to prevent wildlife extinction and is critical for our wellbeing. It is also in line with global calls to stem the sixth mass extinction.”

Under the Convention on Biological Diversity, Ireland is required to publish a biodiversity action plan which is updated on a five-yearly basis. The first three plans have failed to stem the loss of nature in Ireland while “little or no action” is being taken to address key objectives, the NBF said. A new plan is due “at a critical juncture in the biodiversity and climate emergency”, it added.

“National tourism and food policies trade on Ireland’s ‘green’ image, which is not borne out by the evidence. Plans such as Food Wise 2025 and Harnessing Our Ocean Wealth focus on economic growth rather than sustainable management of these environmental systems and areas,” the report found.

“There is significant reputational risk in the continued marketing of Ireland and Irish products as ‘green’, given the state of biodiversity in this country,” the NBF warned.

The report outlined how effective governance and stewardship can be achieved with adequate financing and prioritising of actions. It also outlined how to “recover, restore and renew biodiversity and ecosystems”, while exploiting the nature knowledge pool in Ireland in a better way and engaging communities and the private sector more.

While it acknowledged some progress, such as the success of the All-Ireland Pollinator Plan and the rollout of “results-based” agri-environment schemes, the report said previous plans have “not succeeded in halting or reversing the negative biodiversity trends in Ireland”.

“The Government must increase funding to address the biodiversity emergency and funding must be commensurate with the scale of the emergency,” it said.

Ireland is failing to reach legally-binding requirements and targets agreed as part of the birds and habitats directives, the water framework directive, the marine strategy framework directive and the common fisheries policy. “These infringements are costly . . . the State was fined €15 million for failing to ensure that the environmental-impact assessment for Ireland’s largest wind farm at Derrybrien, Co Galway, was carried out,” the NBF noted.

The report made recommendations on meeting commitments to protect 30 per cent of land and sea by 2030, noting that insufficient conservation management at present means “Ireland offers little more than paper protection for its designated areas”.

The State must lead in resourcing and managing nature on existing designated sites, while creating new designations on public land, it said.“To achieve this, [the State] must incentivise and engage with local authorities, communities, farmers and other private landowners to maintain and enhance biodiversity on their land and to create local nature reserves.”

Creation of marine-protected areas should be a higher priority with more investment to improve the quality of the marine environment. Monitoring and evaluation of agri-environmental programmes must also be improved, it said.

The NBF said the Government must “effectively communicate” the value of biodiversity through a dedicated communications strategy, similar to what was produced to manage the pandemic, to create a common call to action nationally.

“The natural infrastructure of biodiversity, which is fundamental to mitigating risks of climate change and supporting our wellbeing, health and economy, is being eroded at an accelerating rate,” said NBF chairwoman Prof Yvonne Buckley.

“The biodiversity crisis is not a problem for just one section of Government. Alignment of policies across all Government departments is urgently needed in order to protect, restore and renew biodiversity as the foundation of people’s livelihoods and wellbeing.”

Representing the Environmental Pillar, co-author Pádraic Fogarty said: “This review highlights the central role of the State in the biodiversity emergency and how it has simply walked away from its responsibilities. If the new biodiversity action plan is to have any meaning, it must be backed by law – legislators must step up to this task.”

“Ireland is a signatory to several biodiversity laws and conventions, yet 85 per cent of habitats have bad ecological status and two-thirds of our wild bird species are in trouble,” said co-author Oonagh Duggan, head of advocacy at BirdWatch Ireland. “This is the decade of action out to 2030. It’s now or never to stop the loss of biodiversity and restore it.”