Clocks going back: public asked for views on abolishing changes

Brexit could see Ireland on different time to Northern Ireland 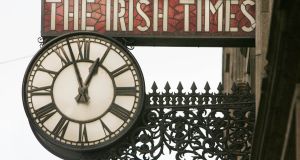 The clocks went back on Sunday and this might be one of the last times this happens, if the public opts to change. Photograph: The Irish Times

The Government has started a public consultation on whether the twice-yearly clock change should be abolished.

Minister for Justice Charlie Flanagan used the opportunity of the clocks going back on Sunday to put questions to the public on the issue.

Depending on the response, the most recent clock change could be one of the last times the country switches between winter time and summer time.

The EU Commission has proposed abolishing clock changes from 2019. The 27 Member States have until April to notify the commission on their views and whether they want to opt for permanent summer or permanent winter time.

“As this is an issue that effects everyone, it is very important that as many people as possible respond to this consultation and express their views so that the Government may take account of public opinion when considering this proposal by the EU,” Mr Flanagan said.

A key issue for Ireland is, with the UK leaving the EU in March 2019, the country will potentially be on a different time to Northern Ireland for half the year.

“It is important to acknowledge that if the UK were to adopt a different position, this would present particular challenges for the island of Ireland. Any position adopted by Ireland will be informed by this important consideration,” the Minister said.

A previous EU-wide public consultation suggested more people in the union are in favour of abolishing clock changes.

People are being asked:

1. Do you want to stop changing the clocks twice a year?

2. If the clock changes stop, do you want to remain on summer time or winter time?

3. What would your opinion be if this proposal were to give rise to different time zones between Ireland and Northern Ireland?

The public can submit their responses online to the Department of Justice hereor by emailing timeconsultation@justice.ie.

The closing date for submissions is Friday, November 30th, 2018.