Irish medicinal cannabis campaigner to speak before House of Commons 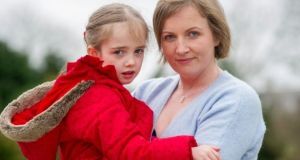 An Irish medicinal cannabis campaigner who secured a licence for the medication for her ill daughter has been invited to the speak in the House of Commons in London today so she can explain the benefits of the alternative medicine in treating conditions such as severe epilepsy.

Vera Twomey became friendly with British mother Hannah Deacon when they lived on the same street in Holland during a period where they were both “medical refugees.”

Ms Twomey was in the Hague to receive medicinal cannabis for her daughter Ava, while Hannah was also in the same position with her son Alfie Dingley. Ms Twomey returned home to Aghabullogue, Co Cork with a licence but Ms Deacon and her son had to leave as they ran out of funds.

Alfie (6) was on Tuesday due to become the second child with epilepsy in the UK to be granted a licence for medical cannabis. Alfie suffers up to thirty seizures a day arising out of his condition.

“Alfie was exiled to the Netherlands like Ava. It is most extraordinary that we lived just ten doors down from each other. His mother Hannah was over the same time as us. I am delighted to sit on the panel.”

A delegation of crossparty MP’s were prepared to fight Alfie’s case. Ms Twomey says that she is disappointed that Irish TDs and councillors are fairly mute on the subject of medicinal cannabis.

“Gino Kenny (PBP TD for Dublin Mid-West) will be at the meeting with me. (If the licence had not come through) the British politicians were standing up and saying, ‘We are going to do something’. They never did it here. The MPs who are supporting the medicinal cannabis extended the invitation to me.

“My amazement at being asked to speak in the House of Commons is, as you can imagine, enormous. It makes me feel deeply saddened that the MPs in Great Britain will invite a woman like me to speak where the TDs in the Irish Government never showed a willingness to speak except under intense duress.”

Ms Twomey said the “exile for medical attention” continues in Holland for families like those of Darren Gibson and his daughter Sophia. The six-year-old CoDown schoolgirl suffers from the same condition as Ava, Dravet syndrome. The catastrophic form of epilepsy causes multiple seizures.

“This has to stop as vulnerable little boys and girls should not be put through this any longer.”

Ms Twomey rose to national prominence during a three-year campaign to secure access to medicinal cannabis to treat Ava’s rare form of epilepsy. The condition has previously pushed Ava into cardiac arrest and an eight-day coma.

Ms Twomey’s campaigning included two 260km walks from Cork to the Dáil to capture the Government’s attention to Ava’s struggle.

She also mounted a very successful social media campaign. Her husband Paul had to live abroad with Ava to guarantee supply of her tetrahydrocannabinol (THC) cannabis.

Ms Twomey campaigned for Minister for Health Simon Harris to grant a special licence which allows Ava to receive medicinal cannabis treatments. Further to securing the right for Ava to receive the treatment, Ms Twomey also successfully lobbied the Government to include the cost of Ava’s €12,000 a year treatment under its long-term illness scheme.

Ms Twomey and her husband had been paying for Ava’s treatment out of their own money, alongside donations raised through a GoFundMe page. The Government has committed to looking into introducing legislation to cater for prescribing cannabis for medicinal purposes. Ms Twomey says she continues to campaign for others around Ireland who are in need of medicinal cannabis.