Irish Ferries confirms up to 10,000 passengers affected by cancellations 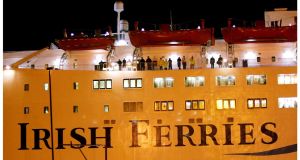 Irish Ferries has confirmed that in the region of 5,000-10,000 customers will be affected by cancelled bookings on a new ferry, the delivery of which has been delayed.

The company, which continued to make contact with booked passengers on Sunday, said it did not have an exact figure for numbers impacted at this stage.

In a statement, the company said it cancelled a number of sailings from July 12th-29th as the German shipyard building the new vessel, the WB Yeats, informed Irish Ferries her delivery “is likely to be delayed”. The company emailed affected passengers late on Friday evening stating that while the delay had yet to be “fully confirmed by the shipyard we have, in the interests of minimising the level of potential disruption to you, taken the decision to cancel your sailing”.

The company is contacting affected customers to offer alternative space on the MV Oscar Wilde for times close to their booked sailing dates. It said in the absence of an acceptable alternative, customers will be entitled to a full refund.

“We know that everybody who transfers to our ship Oscar Wilde, we know that every single one of them is going to be inconvenienced because our Oscar Wilde sails either a day before or a day after [the WB Yeats],” the spokesman added.

“The schedules don’t actually overlap each other so everybody is going to be inconvenienced regrettably.

“There is reservation staff working throughout the day and throughout the rest of the week. Our ambition is to facilitate every single customer according to their wishes. It is an ongoing process.”

The spokesman also denied claims that have appeared on social media that the company continued to take bookings knowing the building of the ship would be delayed.

“Nobody can say we took bookings knowing that there was going to be a delay. It doesn’t make sense to do that,” he said.

“We did not delay at all in notifying passengers. Once we knew for sure the delay was likely, we informed customers.”

Impacted customers have also been offered a €150 voucher by the company, for sailings next summer.

“Notwithstanding the extraordinary nature of the delay in the delivery of the ship to us, which is outside of our control, we do really value your support and would like to offer you a goodwill gesture of a €150 electronic voucher off an Ireland-France trip for next year,” email correspondence to customers said.

Once delivered, the new ferry will have space for 1,885 passengers and crew, 435 cabins and nearly 3km of car deck space. It will do three return journeys each week.

The €147 million ferry was due to start servicing routes from Ireland to France and the UK in July and will be the largest and most luxurious vessel to shuttle passengers to and from Irish ports.