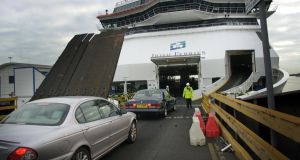 A family whose holiday to France has been disrupted by Irish Ferries’ cancellations has said they will have to pay around €400 in extra accommodation costs and will never travel with the transport company again.

Helen Lane, her husband and two children are among thousands of passengers whose summer holidays to France have been thrown into disarray after Irish Ferries cancelled bookings on its new WB Yeats ferry scheduled to depart in July.

The company emailed affected passengers on Friday evening to say it had “just been informed by the German shipyard building the WB Yeats, the ship on which you are currently booked, that her delivery to Irish Ferries is likely to be delayed.”

Ms Lane and her family are due to travel to the north-west of France for two weeks in July and were informed on Friday their return booking had been cancelled.

She contacted Irish Ferries on Saturday morning to reserve space on an alternative ferry.

“It took me about two hours to get through...They said we can’t get you back on that date, the best we can offer you is to come back three days earlier or two days later,” she told The Irish Times on Sunday.

“Both myself and my husband have those holidays booked from work since last year. The customer service was unbelievably rude and unhelpful. It was just ‘we can’t do anything, you either take the space or not and you need to let us know right now because it’ll be gone’.”

Ms Lane said they reserved space on the Oscar Wilde ferry two days later than their original booking and is likely to pay an extra €400 for accommodation for those nights.

“I did look at flying and other ferry options but nothing was available. Both my husband and myself need to try and get extra holidays and I don’t know if we can, so they’ll probably be unpaid. That’s an additional cost to us.

“Then our two children are booked into camps for the Monday for when we got back. Again that’s fully paid for and we’ll lose that.”

Ms Lane said it was “very sneaky” of the company to email customers on a Friday evening.

“I’m actually disgusted with them and we take the ferry with them a huge amount between Ireland and England because my husband is English,” she added.

“We will never go on Irish Ferries again.”

The company has said in the absence of an acceptable alternative passengers will be entitled to a full refund.

“Notwithstanding the extraordinary nature of the delay in the delivery of the ship to us, which is outside of our control, we really do value your support and would like to offer you a goodwill gesture of a €150 electronic vouchers off an Ireland-France trip for use next year,” the email to customers said.

An Irish Ferries spokesman told The Irish Times the company did not have an estimate yet as to how many people are likely to be impacted by the cancellations as the situation remains fluid. He said discussions with the shipyard were ongoing and the “outcome could yet be positive”.