Irish crew killed by German mine in 1917 honoured in Mayo

Ten men from Donegal, Derry and Antrim and Scotland died in attack on SS Tuskar 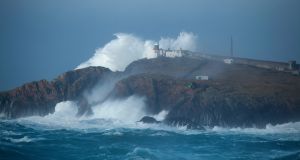 SS Tuskar was three miles west of Eagle island, above, in north Mayo when it was sunk by a mine launched from a German submarine. Photograph: Gareth McCormack/garethmccormack.com

The deaths of 10 Irish and Scottish crew in a first World War sinking off the north Mayo coast have been marked at a centenary commemoration in Erris.

The merchant navy crew members were on board the SS Tuskar, a British steamer en route from Glasgow to Limerick with general cargo. It was three miles west of Eagle island in north Mayo on September 6th, 1917, when it was sunk by a mine launched from a German submarine. Officers and some crew survived, but those working below in the engine room were fatally injured.

The four Irish who died were James Tinney from Co Donegal, Alexander Montgomery from Derry, and James Hopkins and James Mayberry from Portrush, Co Antrim.

The names of the four and their six Scottish colleagues – Gilbert Killen, Henry McGowan and Robert Reid from Glasgow, James Houston from Ayrshire, Thomas Finlay from north Lanarkshire and Neil McClean from Islay – are listed on the Tower Hill memorial in London.

The memorial, which is under the auspices of the Commonwealth War Graves Commission, commemorates merchant navy and fishing vessel casualties during the World Wars and remembers those who “have no grave but the sea”.

“We wanted to remember the 10 here in this area, for the same reason,” said organiser Gerry Sweeney of Blacksod, Co Mayo.

Local community representatives, along with relatives of one of the 10 casualties, James Tinney, attended the event at Scotchport near Belmullet, which was addressed by Fr Kevin Hegarty, parish priest in the Killala diocese. A wreath was laid by Mr Tinney’s grand nieces, Geraldine and Kathleen Tinney.