How a paramilitary threat turned an officer’s life upside down

Forced from their home, a PSNI officer describes the ordeal he and his family face 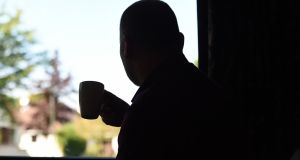 PSNI officer “John” who in the past year learned that dissidents knew where he lived and that there was a real and immediate threat to him, his wife and three children. Photograph: Trevor McBride

A whole chain of negative consequences unfold when a police officer is forced from his home due to a dissident republican paramilitary threat, John, a PSNI officer recounts. And when officers have to move, they move quickly.

In the past year, he learned that dissidents knew where he lived and that there was a real and immediate threat to him, his wife and three children. The dissidents intended to kill him.

“I was formally told I was being lifted out,” John recalls. His commanding officer informed him “matter-of-factly”, but John was in no doubt that “things would never be the same again”.

First came the removal van to take the household contents. Then it was a case of staying with family, then moving to a hotel, then to a couple of temporary houses, then finally, after a period of months, moving to a new house and trying to make it a new home.

Being ousted from the home he and his partner spent much more than a decade putting their stamp on caused personal, financial and psychological stress and anxiety.

“I look at my past life and wonder how the hell my family ever put up with it,” says John, who is in his 40s.

But he had always wanted to be a cop. He went back to work a few weeks after the incident, however, eventually the strain told and he is off work now due to stress and depression. He is anxious to get back into the force.

John (for obvious reasons not his real name) studied modern languages in college and planned to join the Royal Ulster Constabulary in the early 1990s, a couple of years before the IRA called its first ceasefire in 1994. Policing was in his family DNA – a number of his relations were in the RUC.

“As a child I would have looked up to my uncles who were in the police.” His father, however, fearing for his safety, pleaded with him to seek a different career.

He says he stood up to his father on many issues but ultimately yielded to him on this one. He worked in a factory for more than 10 years, but the vocational call was strong and after his father’s death, he joined the Police Service of Northern Ireland in 2003.

He worked as a uniformed and detective officer, covering riots and robberies and murders – “the whole gamut”. He found it exciting and rewarding, with plenty of adrenalin rushes that “you need to be able to push yourself”.

From day one in Garnerville training college in Belfast personal security was drilled into him. “You check under your car, you take different routes, you vary your times for travelling. You rely on intelligence as well. It all becomes very much the norm.”

The dissident murders of constables Stephen Carroll and Ronan Kerr also would have concentrated his and other officers’ minds that the threat was deadly.

He and his partner had to be cautious in other ways too. “We did not have much of a social life. If we did go out we made sure never to go back to the same place again within a couple of months. My partner is a very social person and she found it restrictive. Sometimes we would have to decline a wedding invitation and avoid other events. She would blow her gasket from time to time because ‘we can’t go here, we can’t go there, we can’t go anywhere’.” But they managed, until the dissidents planned to come calling.

The first priority was to get a house after they quit their home. After a period of unsuitable temporary accommodation, they finally found a new dwelling.

While Police Federation chairman Mark Lindsay says that some officers forced from their homes ended up in serious negative equity, John was lucky.

When they sold their own home and purchased the new one they “just about broke even with a few grand left over to buy bits and pieces”. Neither did they have to downsize, as was the fate of some other officers. But their two cars had to go.

If the dissidents had discovered the original home by tracking either of their cars then they could trail either of the cars to their new abode. “We had to buy two new cars and that hit me hard financially.”

Moreover, his partner could no longer work from her office. If the dissidents had discovered their first home by following her from her place of work, they could likewise discover the new house. She has good employers and she was able to work from home but again that did not suit such a sociable woman. She was “devastated”, says John.

“My partner would be a very strong-willed woman but her whole world just collapsed around her. She had to see a doctor, and is on medication for anxiety and depression.” As is he.

He understands how difficult it has been for her. “Her job has changed, she does not get to see people. She is stuck at home, she has no family here, she is stuck in a town she does not know. There has been a bit of a blame game – ‘You dragged me here’, that sort of thing. It has definitely put a strain on things.”

Their eldest son had just started college in England so that was not a big problem. He shared a house with some fellows from Northern Ireland and John had to advise him not to disclose his line of work. “Over there,” his son told him, “nobody cares about that sort of thing”.

The middle child, however, was distraught. “She took it very badly and did not want to leave [the original] home. For a period she stayed with friends and relations. All her anchors are back home. I don’t think she will ever integrate in the new location. I know rightly she is torn apart. I am quite confident that she would want to be with us all the time but she can’t adjust at the moment. We will get there at some stage.”

His youngest, who is in primary school, was the big surprise. John and his partner thought she would be least able to cope. She was leaving a school and teacher, friends and hobbies that she loved, but she was stoical. “She is a girl who sees the good in everyone and in everything,” says John.

On reflection, John thinks his youngest picked up on the couple’s cares and worries and in her own way was trying to help.

“In hindsight, she was probably concerned about her mother and me as well.” John adds, “From the day I joined the job there was always in the back of my head that something could happen or something might happen. I had a few brushes but everybody has that. But even when it did happen there was an air of, ‘We’ll just march on. This has happened so here’s what we do: we have to do this, that and the other’.

“But it was what was crumbling all around me, between my partner and the two younger youngsters, that wasn’t immediately apparent to me. It was only as time went on that I could see what was happening to the children and my partner as well. It was probably the most difficult thing for me to address.”

Police colleagues have been very supportive – sometimes in typical hard-boiled fashion. He attended a police leaving do recently and was about to join a bunch of other officers at a table. “But before I could sit down one of my mates jumped up and stopped me and checked under the seat first.” He laughs at the black humour and says, “Without my colleagues it would have been much more difficult.”

John believes and hopes he, his partner and children will come out the far side of this trial dented but strengthened. He is engaged in counselling through the PSNI’s occupational therapy scheme. Waiting lists for such support have been significantly reduced by a £1 million investment by the police representative body, the Police Federation.

He finds it helpful and therapeutic, but strange, because, as a strong physical man, he seldom had to seek medical help: “Up until then I never had to bother about such things. A couple of years back I made a doctor’s appointment. When I asked for my doctor I was told he retired 14 years ago.”

John doesn’t have too much to say for the people who created this crisis. He knows too that some of his colleagues and their families have fared worse. He says he is absolutely convinced people who inflict misery ultimately must suffer misery themselves.

John intends to get back to a job he loves. “Oh God aye, oh aye,” he says with quiet but considerable emphasis.

“It is pretty much my day-to-day life. I have been off now for six weeks and I can feel myself slowly crawling up the walls. If I had it at the back of my head that I was not going to go back, well I don’t know what I would do. For the sake of my sanity, for normalisation and stability, I want to get back.”