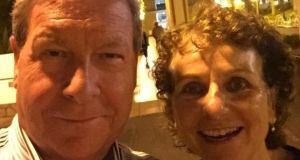 Dr Ian Lindsay and Mary McCarron who are still stranded in Cusco, Peru after being unable to board a flight.

A retired Irish doctor still stranded in Peru because of the Covid-19 pandemic has said he and his family are caught in a “dire situation” after being refused access to board a military flight to Lima.

Dr Ian Lindsay, a retired general practitioner from Dublin, was due to fly home to Ireland on board the emergency repatriation flight organised by the Department of Foreign affairs with his wife on March 29th. However, a few days before the flight left he tested positive for the coronavirus and was unable to leave the Peruvian city of Cusco.

Nearly three weeks on the couple are still stranded in Cusco with Dr Lindsay’s sister-in-law and her partner. The two couples originally travelled to Peru at the start of March with Dr Lindsay and his wife Mary McCarron scheduled to travel on to Buenos Aires in Argentina where their son was studying before the coronavirus outbreak. He has since returned safely to Ireland.

Shortly after Dr Lindsay tested positive for the virus, local health authorities in Cusco extended the mandatory quarantine period from 14 to 28 days. As a result, the couples were unable to leave the city for a British Airways repatriation flight from Lima earlier this week.

The couples, along with a group of Irish, British and German tourists also awaiting evacuation in a nearby hostel, subsequently learned that a military plane had been arranged through the office of the Peruvian government to fly them from Cusco to Lima.

On Wednesday they packed their bags and travelled to Cusco’s small airport ready to board the flight. “The plane landed and then took off again without opening its doors,” Dr Lindsay told The Irish Times by phone. “It was ordered to turn back a second time and the same thing happened – it landed and left again without passengers.”

“Apparently it was blocked by Cusco’s health ministry. The smaller airlines in conjunction with local authorities in Cusco have made a general rule that airlines won’t carry people who have ever had Covid, even if you had it a month ago and have since recovered.”

Dr Lindsay believes the reluctance to fly the group out is connected to a blood test recently carried out among tourists staying in the nearby hostel who are also trying to fly back to Europe.

“We’re not even sure that the blood test exists, we think it’s all political games at this point. We have documents from the local health board saying we’re healthy and good to go. I had a medical the morning of the flight and I was told I was perfect.”

The couples are in regular contact with officials from the Irish embassy, who they say have been very helpful, along with the UK and German embassy. They’re hoping to make it to Lima in time to catch a flight leaving for Germany on Sunday. With a ban on land travel in place on most Peruvian roads, the couples must fly to the capital.

“Embassies are working full time to get stragglers out but it’s a very difficult state to deal with. We’re waiting to see what will happen with airline, embassy and ministry of health negotiations along with local politicians who have made these rules.

“I’m feeling very depressed, they’ve organised for me to see a psychiatrist today. We’re just frustrated by the Peruvian bureaucrats. We are truly stuck now, are losing hope of getting home soon.”

1 Aaron Brady, the man who said with pride he was a cop killer
2 Aaron Brady found guilty of capital murder of Det Garda Adrian Donohoe
3 Coronavirus: 40 new cases and one more death confirmed by Nphet
4 A chronicle of dignity and despair
5 House seized by Cab from Liam Byrne petrol bombed after being rammed by car
Real news has value SUBSCRIBE