Irish concerns over delays at ports: ‘If it is bad now, it will be standstill in January’ 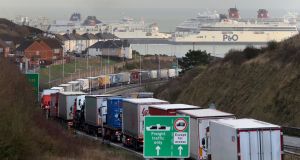 Trucks queue for the port of Dover: Irish lorries have been caught up in road-side “stacking” of vehicles over the past week. Photograph: Gareth Fuller/PA Wire

Irish lorries have been caught up in road-side “stacking” of vehicles over the past week and logistics businesses fear that traffic gridlock around the Kent ports of Dover and Folkestone and at Calais in France are a foretaste of more severe disruptions once Brexit checks start in January.

Laurence O’Toole, managing director of Co Galway-based O’Toole Transport, said he had to hire extra drivers in the UK for next-day deliveries of seafood from Ireland and Scotland to France because of seven-hour delays at the ports.

This has added costs of up to 40 per cent and reduced productivity at his firm, which transports produce to and from a major seafood distribution hub in Boulogne-sur-Mer in northern France.

“God help us if we ever get some conclusion to these Brexit talks. Our fear is that hours of delays are going to turn into days from January,” he said.

“We are transporting fresh seafood on those routes and that has to be in France the following morning and the value is going down every day it is out of the water.”

Mr O’Toole said that his supply model relies on the UK “landbridge” route to mainland Europe. Taking direct ferries from Ireland to France would add a day to the supply, reducing the value of the produce.

“The market starts at 5am and if we miss the market for traffic reasons, the customers don’t want to know about it. They aren’t forgiving; if there is a hold-up, it is their fish at stake,” he said.

Although the landbridge route is only part of his business, he is concerned that the systems at the French ports are not set up to expedite Irish lorries through green channels. “We are not so concerned about it now because it is not even a day [of a delay], but we do fear that in January the process will become two days,” he said.

Aidan Flynn, general manager of the Freight Transport Association Ireland, said that transport companies were booking on to ferries from the UK into other French ports to avoid the “pinch point” of Calais.

“Everybody is trying to react to it and divert before they are caught up on it,” he said.

Mary Mullins, business development manager at Rosslare-based logistics company Baku GLS, said the company was losing a day of delivery time for every driver as a result of the delays.

Ms Mullins expects the additional customs declarations and border controls paperwork – “15 steps extra which we don’t have to do today” – to add significantly to the disruption from January 1st.

She thinks many companies will book on to direct ferries between Ireland and France to avoid England and EU-UK border checks after Brexit in the first half of next month. “If it is bad now, it will just be standstill in January,” she said.

A knock-on consequence of delays will be the need for additional warehouse space. “People will have to store more goods because supply lines are going to get slow,” he said.

Mr O’Toole said that he has had a “huge” number of requests for space in his Irish warehouse in order to stockpile ahead of the Brexit checks. “It has been like this on every Brexit deadline but this deadline is coinciding with Christmas and the end of the year. With Brexit coming on top of that, it is creaking all over,” he said.

David McArdle, whose Dublin-based firm DG McArdle International transports goods through Dover and Calais, said the delays were adding a day and a half on return trips to Europe and adding to his costs because of the strict daily limits on tachograph driving hours for hauliers.

“This is only minor,” he said. “It is only a blip as to what is going to happen with Brexit.”