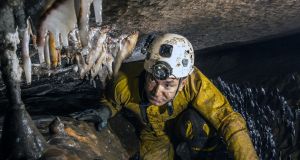 Irish-based cave diver Jim Warny was part of the international team which assisted in rescuing the 12 boys and their football coach from the cave system in northern Thailand this week.

Warny (35), who is Belgian, has been living and working in Ennis, Co Clare for the past 15 years and helped to set a new Irish-British record for caving eight years ago.

Over the past three days, he has been part of a team of 20, working with Thai Navy Seals, to relay the young boys through the extensive subterranean system.

Warny’s experience, including a recent expedition to Mexico and the recovery of the body of a close friend in Co Clare in 2011, led to him being asked to assist British colleagues in Thailand.

Warny had set a new British-Irish record for a cave traverse with his friend, Artur Kozlowski, in south Galway in 2010.

He has explored the Gort Lowlands and the Fergus river cave in recent years and has been in Pena Colorada.

In September 2011, when Kozlowski did not return from an attempted traverse of the Pollonora cave system between the Slieve Aughty mountains and the Burren, Co Clare, Warny descended into the system and located his friend’s body at a depth of 52 metres.

Both Stanton and Volanthen have been key to the rescue effort in Thailand since late June.

His colleague and fellow cave diver Cathal Mullane says Warny is a highly respected and experienced member of the Irish Cave Rescue Organisation, of which he is diving liaison officer.

“We were out on a cave diving expedition on June 23rd when we heard about the missing Thai boys and their coach,” Mullane says. Warny then offered his help and flew out from Shannon just last weekend.

His experience in working in low visibility, high flow and restricted space stood him in good stead during the highly challenging mission, Mullane says.