Irish astronomers become the first to visualise a star being born 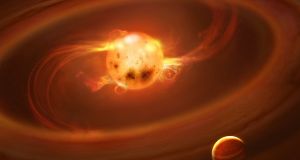 Irish scientists have made a major discovery on how stars, plants and ultimately us came into being.

An international team, led by scientists from the Dublin Institute for Advanced Studies (DIAS), has directly observed for the first time how young stars are formed.

Stars like our own sun are massive balls of gas where hydrogen atoms are fused into helium ones which release enormous amounts of energy providing heat and light to our planet and rest of the solar system.

Astronomers have long speculated on how stars are formed. They come from giant molecular clouds of gas and dust which collapse into a dense ball of gas called a presteller core.

The DIAS team has been looking at how stars move into the next phase of becoming huge objects which have enough gravity to support solar systems like our own.

The team detected how columns of matter rain onto a new-born star from its surrounding disc. Such discs, known as protoplanetary discs, not only give birth to stars but also planetary systems like our own.

To make the discovery, the team used the high-precision GRAVITY super-telescope at the European Southern Observatory (ESO). It combines the light of four of the largest telescopes in the world into one.

They have been observing TW Hydrae which is approximately 196 light years away and is the nearest new star in our galaxy. It is only between five and 10 million years old in comparison with our sun which is 4.6 billion years.

The telescope is so powerful that it has been able to view the equivalent of the sun and the orbit of Mercury though it 2,000 trillion kilometres away.

Professor Tom Ray of DIAS’s School of Cosmic Physics said TW Hydrae was a “steller baby” and it it has now visualised what was previously theorised.

“We are trying to see how the sun, the solar system and the planets formed,” he said.

“It’s a star that is very like our own sun. There is a disc that we see and that disc has got gaps in it and those gaps are planets. We are seeing the umbilical cords of the stars.

“These research findings are highly significant because they enable scientists to better understand how stars like our Sun form, and how the discs surrounding these stellar embryos give rise to planets like the Earth.

The astronomers discovered that stars gain their huge mass by sucking in material from around them as they resolve from a disc into a sphere under the forces of gravity.

“However, this was not confirmed until we carried out our ground-breaking study and saw first-hand the process in action.

“This makes us the first researchers to confirm the process by which new stars – and, ultimately, planets – are born.”