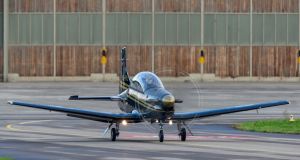 Stock image of a PC-9M a military training aircraft. Photograph:iStock

An Irish Air Corps aircraft suffered an engine failure on Friday afternoon, requiring the crew to glide the plane back to base.

The two-person PC-9 aircraft was conducting a training mission when its single engine gave out some 30km from Baldonnel.

Instead of ejecting, the two Air Corps pilots were able to manoeuvre the aircraft and glide it in for a safe landing at Casement Aerodrome, Baldonnel in south-west Dublin.

The pilots were unharmed aside from being “slightly shaken”, said a military source. “They’ll be having a stiff drink tonight.” The Defences orces said an investigation had begun.

In a statement, it said the training aircraft from the Irish Air Corps Flying Training School departed Casement Aerodrome, Baldonnel at about 3pm on Friday on a routine training flight.

“At approximately 30km from Baldonnel, the aircraft began to experience engine power loss. The flight crew consisting of one instructor pilot and one student pilot, turned back towards Baldonnel. The aircraft landed safely in Baldonnel a short time later.

“An investigation in accordance with standard regulation and procedures has now commenced to determine the cause of this incident.”