After a year of disruption, there are concerns over long-term impact of school closures 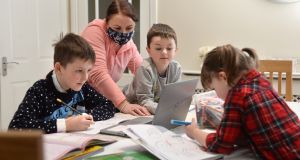 Claire Kenny, a mother of three, will breathe a huge sigh of relief when schools reopen on Monday.

Homeschooling in recent weeks, she says, was a very different experience to the last lockdown.

“It was so relaxed last time – but this time the curriculum was progressing. I could see my son in first class getting frustrated and upset where there was something he had difficulty understanding,” says Kenny, whose sons Ryan (9) and Shane (7) attend a Gaelscoil in Kilcock.

“I felt my own shortcomings too – I’m not a teacher and don’t have those skills. Emotions were running high. Mammy would be repeating herself and there were the inevitable tears.

“Reading and writing seemed to require more and more effort... You hope they’ll be able to catch up.”

She is not alone. Many parents have struggled during the school closures and are worried about the longer-term impact of learning loss. Research by the Central Statistics Office (CSO) indicates that parents of second-level students are most likely to report that closures have had a “major negative impact” on their children’s learning (36 per cent) compared with primary pupils (15 per cent).

Educators, however, differ on the extent of scale of the damage to children’s education.

In the United Kingdom, the government’s education recovery tsar Kevan Collins says children’s learning have suffered a “profound shock” which will require a number of years, as well as extensive further funding and creative new approaches to the curriculum, to recover.

In Ireland, Dr Paul Downes, an associate professor of education at Dublin City University’s Institute of Education, says that while school closures are a “crisis situation” and will have a detrimental impact on children, the extent of it is very uneven.

“I don’t think we’re talking about a lost year, but there will be a detrimental impact and it will be much more significant for some cohorts,” he says.

“In a family in the leafy suburbs, where both parents are working from home and there is support and access to parks or beaches, that’s one thing.

“In another, where parents are out working and children are on screens all day, the experience is very different...”

DCU research, for example, found that at least 25 per cent of students in Deis – or disadvantaged – primary schools in Dublin did not engage with school during the last school shutdown; this rises to 50 per cent in some individual schools.

A major concern, Downes says, is around the damage to children’s concentration levels, as well as reading and maths loss.

While principals, teachers and parents have worked hard to keep learning alive online, these efforts are not likely to provide anything close to the quality of education delivered in the classroom.

The scale of learning loss, he says, will not become clear until the results of standardised tests take place later this year.

In the meantime, he says teachers will be focusing on supporting children to re-engage with classroom learning and taking a differentiated approach to learning, given that so many pupils will have had different learning experiences at home.

While the Government says it is planning a “summer school” programme for disadvantaged pupils and those with additional needs, Downes says far more ambitious plans are needed. He points to the recommendation of a recent Oireachtas committee report that urged the adoption of a wider range of supports, including emotional counselling and therapeutic supports in all schools as an urgent priority.

As for now, mothers such as Claire Kenny are just thinking about getting their children back in the classroom.

While she has had worries over the long-term impact on her children, she feels better after discussing the issue with teachers.

“Any educators I’ve been in touch with have been very reassuring,” she says. “They’ve told me the curriculum is like a spiral, so even if they’ve missed something they come back at it again. So, they’ve missed chunks of time, but they’ll catch up on the education. I really hope that is the case.”