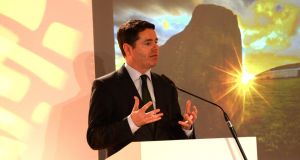 Minister for Tourism Paschal Donohoe speaking at the launch of Ireland’s Ancient East at the RDS on Tuesday. Photograph: Cyril Byrne/The Irish Times

A new tourism initiative promoting Ireland’s historical attractions has the potential to increase visitors by 20 per cent and raise revenue by almost €1 billion, according to Fáilte Ireland.

Minister for Tourism Paschal Donohoe, who launched Ireland’s Ancient East plan in Dublin on Tuesday, said the trail would be as “effective and popular” as the west coast’s Wild Atlantic Way.

The scheme, which is to be rolled out in 2016, is designed to “maximise the history and heritage in the region and bring it to greater international attention”. In order to achieve this, it will offer visitors a “personal experience” of 5000 years of history.

Speaking after the launch, Mr Donohoe said no budget had been devised for the plan as of yet.

“We’re going to work on that during the year,” he said. “Because this plan will be taking place next year, we’re going to go out to local communities, get their reaction to it, and then across the year then we’ll make a decision in relation to capital funding.”

A spokesman for Fáilte Ireland said their research suggests the initiative has the potential to deliver an extra 600,000 overseas visitors, which equates to growth of more than 20 per cent in the region.

He also said visitor revenue could increase by almost 25 per cent to €950million in total by 2020.

Ancient Ireland will feature “the dawn of civilisation” including the prehistoric attractions of the Boyne Valley in Newgrange and sites such as the Brownshill Dolmen in Carlow.

Finally, Anglo Ireland will include Ireland’s “great houses and gardens” as well as sites such as the Dunbrody Famine Ship and Wicklow Gaol.

The launch took place at the RDS, Dublin, during the first day of Meitheal, Ireland’s largest travel trade workshop, at which 277 of the world’s top travel and tourism buyers engage with 500 Irish tourism businesses.

Speaking during the launch, Mr Donohoe said he was confident the new scheme would be “as effective and popular” as the Wild Atlantic Way.

“The market research tells us there is potentially a lot more growth out there if we pitch our best assets to those segments with the most potential,” he said.

“Indeed, when I recently launched our new national tourism policy, I emphasised that we would need to continue developing projects that were both big enough and attractive to help us cut through to compete in international markets.

“With the great amount of history and heritage in such a relatively compact area, Ireland’s Ancient East will allow us to seriously build on the assets we have in the east and south – and the significant investment which has been made in tourism attractions in the region over the last few years.

“While appealing to a different type of a visitor, I am confident that Ireland’s Ancient East will prove as effective and popular as the Wild Atlantic Way and will, when brought to the overseas markets by Tourism Ireland and the tourism trade, deliver significant additional numbers of visitors, revenue and jobs to the region.”