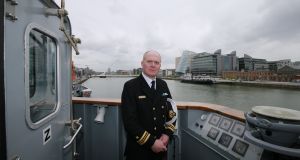 Strong support for Ireland’s military engagement in humanitarian and peacekeeping operations was delivered at two separate events in Dublin.

The Fine Gael MEP Brian Hayes told a meeting of the Irish Defence Forces Officers Club on Thursday evening that the changing security landscape within the European Union needed to be recognised and discussed.

The debate on neutrality was largely academic and theoretical, he said, “but we are facing the reality that member states want to do more in the area of security and defence, and we need to be part of that debate.”

Brexit was a “game changer moment for Ireland in navigating our new relationship with the European Union”, he maintained.

“We will obviously never agree to something that is not in our interests but we must take our membership of the EU more seriously, now that the UK is leaving.

“ This State has a fundamental choice to make as to whether or not it wants to deal seriously with defence-related issues. That means expenditure of course, but it also means making the brief a political priority.

“The Minister for Defence should always be a full cabinet position in a full Government Department of State. At a policy level, so much of the development that is occurring is at an EU level. We need a fuller national debate on these developments and that requires political leadership.”

He did not believe an EU army was on the horizon, but security issues were and Ireland’s participation in Pesco (the EU’s mechanism for security co-operation) meant Ireland needed “to have a view on what type of common defence union we should be part of, if at all”.

“Across the EU other governments and citizens are genuinely worried about Putin’s Russia, Isis and how mass migration could potentially undermine European security,” he maintained. “We need to understand and be aware of other member states’ views on this. Be aware of the sensitivities of member states like Estonia or Latvia who live on the collar of Russia. Or member states like Finland or Sweden who are rethinking their traditional security needs.”

Earlier, the benefits – and challenges – of international engagement were referenced at the 32nd International Congress on Occupational Health hosted by the faculty of occupational medicine of the Royal College of Physicians of Ireland in the Conference Centre in Dublin.

Participation in overseas defence and humanitarian operations was hugely beneficial to the Defence Forces and to the country as a whole, according to Lieut Cmdr Tony Geraghty from Operational Command of the Naval Service.

“Because of decisions the Irish State made, many people are alive today who would not be,” he said during a visit to the Naval Service off-shore patrol vessel, the LE William Butler Yeats, which was berthed on the Liffey opposite the Conference Centre.

He was referring to the thousands of people rescued from the southern Mediterranean by the Naval Service, which is now participating fully in Operation Sophia, the EU military mission to disrupt the activities of people smugglers operating along the Libyan coast and rescue those abandoned at sea in unworthy craft.

While Ireland was making a contribution on the international stage, there was a significant pay-back to the country as well, said Lieut Cmdr Geraghty, who captained the LE Samuel Beckett in the Mediterranean.

“What we’re encountering down there is as close to a medical battlefield as you can get,” he said. “It is effectively a mass casualty situation.”

Almost all operational members of the Naval Service had been to the Mediterranean, along with the Army medical branch, learning from being involved.

“They have all gained experience of having to prioritise in a fast-moving situation,” said Lieut-Col Anthony Corcoran, deputy director of the medical branch, adding that Defence Forces ambulance crews were now assisting the civilian ambulance service in Ireland.